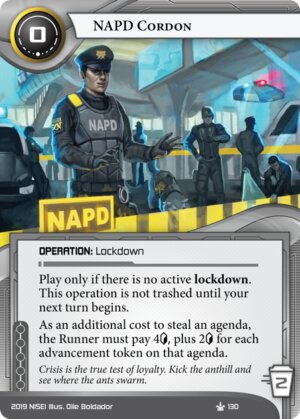 Play only if there is no active lockdown. This operation is not trashed until your next turn begins.

As an additional cost to steal an agenda, the Runner must pay 4credit, plus 2credit for each advancement token on that agenda.

Crisis is the true test of loyalty. Kick the anthill and see where the ants swarm.
Illustrated by Olie Boldador
Decklists with this card

Inspired by NAPD Contract, this is the most straightforward lockdown and probably somewhere in the middle in terms of power. I think it is better than SYNC Rerouting (most runners have answers for tags and paying 4 to ignore the effect is manageble) and Argus Crackdown (unless the corp has Border Control and/or Cayambe Grid) but worse than NEXT Activation Command (just a solid tax) and Hyoubu Precog Manifold (Caprice on demand can be game changing, even if it is only one turn).

Probably best used with a 4/2, since you can install, advance, play this. Now the agenda costs 6 extra credits to steal. It is also solid to install a 5/3, bluffing an asset, and then double advance and play NAPD Cordon on the next turn. Even more mean if the agenda is Bellona. You want to spend 13 credits on that?

Obviously Film Critic is this card's worst nightmare, but then again, she is that for many. Be sure to have an out if your deck relies on this event.

Great review! I feel that NAPD Cordon is comparable, or but specialized in a different way, than SYNC Rerouting. NAPD Cordon will "protect" agendas by costing more creds to get the agenda. But it does nothing to the runner who is trying to trash you asset or agenda (using Imp, Stargate or Freedom). SYNC Rerouting will make any run cost something to the runner. NAPD Cordon can be compared to Red Herring in that respect. In my opinion, Hyoubu Precog Manifold is the worse, because, like NAPD Cordon, it scream "I have an agenda on the board right there!" The main advantage of NAPD Cordon is the fact it is neutral. I'm glad that Film Critic and Currents are banned, lockdowns are better for the game.