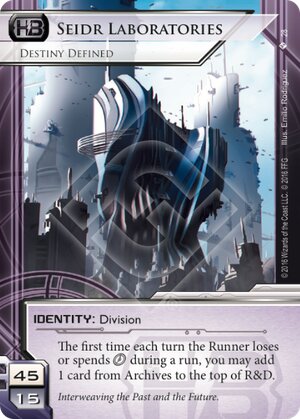 The first time each turn the Runner loses or spends click during a run, you may add 1 card from Archives to the top of R&D.

Interweaving the Past and the Future.
Illustrated by Emilio Rodriguez
Decklists with this card

Well no one else has reviewed this yet so lets give it a try. So, the age old question when looking at a new HB id: why am I not just playing EtF? The 45/15 setup is pretty standard so lets see if we can do something good with this weird recursion ability.

First thing is getting it to actually fire. Plenty of bioroids, perhaps enigma or Turing, not sure any of the other lose a click ice is worth it. Nothing terribly unusual. There's also upgrades like Mason Bellamy but he and the combo's he goes with are unreliable and easily played around by a good runner. If your opponent is good your ability mostly reads "opponents can't spend clicks to break ice". Still not bad. Runs are a bit trickier and more expensive unless the runner really needs to get in right then. Those hail mary end of game runs do not care.

Now lets say you do get the ability to fire; what to get back? HB already has Friends in High Places so most of the time assets upgrades and ice are better played right onto the battlefield (and if you are EtF you get a cred back too). Unless you have some weird reason you want these cards in hand instead of in play (the Twins? if you're feeling the jank combo) the main targets you'll want is gonna be powerful operations. The other HB id's cover other deck types already anyway. Econ ones (Hedge Fund, color clearances, perhaps even restructure) are nice but only keeping up with EtF at best. You'll need things with a higher impact. Think Biotic labor for scoring, or great imported operations from other ID's. If you can get this ability to trigger the runner should be panicking cause something bad is coming.

Couple other notes, the fact that the card goes to RnD can slow down flood if thats a problem and choosing what the runner will access is always nice. Could throw a couple traps in just for that purpose. Overall the unreliable ability will probably hold this ID back from every being a big thing but the unique way it plays and makes the runner weigh decisions is a lot of fun.

(Terminal Directive Cards era)
Erenoth 8
One important note is that if you put Bioroids over R&D then your ability triggering will set up the card the Runner is about to access. This makes it a bit easier to defend R&D. — LordRandomness 10 May 2017
With trap cards that trigger out of R&D that trick becomes even more fun. Snare, anyone? — Silv 10 May 2017
Or recur Friends in High Places for maximum cancer — Shieldwall 10 May 2017
#Mason Bellamy! — StarlightCrusade 27 Dec 2017
2

I've tried a few times to make a deck with this ID, and it isn't easy. The ability leads to interesting interactions with the runner, and I consider it one of the most interesting corp IDs printed. Using cards like Tapestry and Eli 2.0, you can immediately draw used econ cards, put a snare on top of R&D mid run, or recur nasty assets. Unfortunately, as with every other non-core HB ID, you need to be getting a lot out of the ID's ability, or else why not just play core EtF? This is doubly problematic with this ID, as there are very few ways to force the runner to lose a click.

If anyone sees any other main options, let me know, but from my perspective, the best bet is Ronald Five asset spam - which still is probably better in EtF. If you really want to be cruel, recur Friends in High Places. I've seen decks that try this though, and you end up cutting stronger assets for more econ cards as a result of losing Etf credits. In the end, the ID makes for infrequent and interesting choices which are largely overshadowed by the infamous core HB ID.

This is going to sound weird but I think Seidr might actually be the brain damage ID. Sorry Cybernetics Division, I have tried to love you, but its over.

What does spending/losing s mid-run have to do with brain damage? Spending s is how you turn the nasty brain damage facecheck penalty on Viktor 1.0, Heimdall 1.0 and especially Fairchild 3.0 into a gentle "miss half a turn". Seidr tips that end of the scale by also offering recursion, which is going to force some runners to take it on the noggin to keep that away from you. If you love jank you could even tip the scales back the other way again for a pretty severe catch-22.

In general a lot of lost s during runs come from ICE subroutines, so Seidr makes facechecking more dangerous. Therefore, if you rush to score out, you can force the runner to run while your ID still has teeth on those nasty facechecks, and maybe you can threaten a kill if they go too fast and end up reducing their handsize.

Even with Engineering the Future gone Seidr has stiff competition from economy IDs. Sportsmetal in particular can rush faster and keep tempo while trading agendas with the runner. But none of these are quite as cool as Seidr, and if you went out of your way to look up reviews of this ID that won't deter you from having your fun.