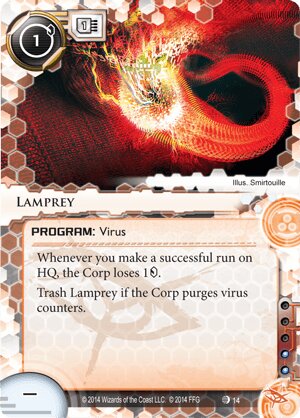 Whenever you make a successful run on HQ, the Corp loses 1credit.

Illustrated by Smirtouille
Decklists with this card

It is shocking to me that this card has no reviews yet. Lamprey completely changes the game for Anarch (specifically Noise). Between Parasite and Medium, Anarch R&D pressure is immense, but aside from building Datasucker counters, they haven't had must reason to hit HQ, especially if they corp is trying to rush their agendas into a remote (usually smart against Anarch). Lamprey threatens remotes the same way Account Siphon does for Criminals. When the corp tries to score, this thing splits their attention and FORCES them to rez their HQ ice (lest they lose 6-7 credits for nothing, in addition to what they spend scoring). If HQ is naked because of a Parasite, and the corp is somewhat poor, this card absolutely buries them and takes several turns to recover from (after which is can easily be recurred in 2's by Deja-Vu or mid-run by Clone Chip). Quite the bargain at 1 credit. This is a total game changer and the ability to leverage this card is what separates the good Noise players from the Oppressive strong Noise players.

(The Universe of Tomorrow era)
TheBigBoy 8859
Not to mention it's very appetizing Aesop's fodder as soon as HQ gets locked down. Even if you only drained a credit or two with it, you still got the R&D mill from the virus, and a 2 credit profit. — Bigguyforyou518 26 Sep 2015
1

Really, really weak. You should not use this in your deck,

(Unless you intend to be doing HQ lock, which is the criminal's specialty, or (maybe) in an anarch economy control deck).

Lets look at the numbers:

Easy Mark: At cost 0, gives you an unconditional burst economy profit of 3. It is rarely used, due to how good its counterpart is:

Hedge Fund: At cost 5, profit 4, Runners usually have this required amount or can comfortably click to it.

So, Lamprey needs to provide at least a profit of 4. Its install cost is 1, which means it needs to produce an economic advantage of 5. That means you need to run on HQ 5 times before breaking even with Hedge Fund. This is conditional economy, as you only gain those credit advantages when you run on HQ, and it distributes the gain over several turns, so its also drip economy, making acquiring them much more difficult and awkward. In addition, it uses up a memory slot in the meantime, restricting the use of other more useful programs, and is trashed when purged, which is likely to happen multiple times with anarch runners, so it may not even pay itself off. Even if its memory and install costs were 0, it would still be roughly at level to Easy Mark, which is rarely used.

However, it (might) be worth (considering) in anarch decks running Bhagat and Wanton Destruction, or in a control deck with Ixodidae.

In conclusion, throw it in the binder and forget about it.

(Reign and Reverie era)
Apex Predator 31
The idea is to bring the corp to zero credits and keep him there. Preferably out of Reina or with Omar. As mentioned above, you need other reasons to keep running HQ, like Bhagat/Maw. Still, it's a card from an era when economy wasn't what it is today. Its heyday has passed now that corps are swimming in cash. — Severijn 28 Aug 2018
Thank you. — Apex Predator 28 Aug 2018
Even if you don't manage to do a money lock, cards like Lamprey can still cause a huge tempo hit, especially at the start of the game. True that with Flashpoint Crisis, Corps became filthy rich, but I wouldn't underestimate this little piece here. Its role might have changed, yes, but I still wouldn't consider it binder fodder! — H0tl1ne 3 Sep 2018

Lamprey's closest comparison in my mind is the highly coveted desperado, albeit, server specific and in reverse. But I dont think that should discourage peoples view of it. In a specific deck that targets HQ, this card can be suprisingly effective. Import this into a agressive criminal build with Gabe and desperado, and this applies added pressure to the ecconomy swing. And while it is server specific (HQ), it fires on each sucessful run on HQ, meaning that with Lamprey, desperado, and Gabe, you can potentially be up 6 credits on 4 HQ runs, while the corp is down 4 credits. Start stacking lampreys on something like shenherezade, and you can really start seeing crazy ecconomy swings. In that same scenario with 3 lampreys out, you could potentially put the corp down 12 credits and yourself up 6 on four HQ runs in a single turn. If you couple that lineup with something lile bhagat, you can even get a card off the top of R+D as the cherry on top. Certainly situational, and largely requires a build to be in the same ballpark, it can be an effective tax on the corp if your deck makes multiple HQ runs per turn.