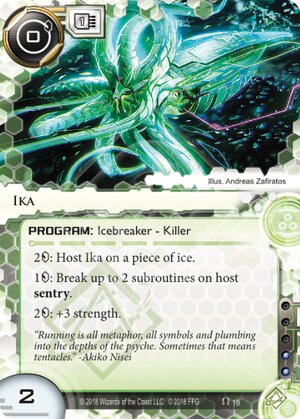 2credit: Host Ika on a piece of ice.

1credit: Break up to 2 subroutines on host sentry.

"Running is all methaphor, all symbols and plumbing into the depths of the psyche. Sometimes that means tentacles." -Akiko Nisei
Illustrated by Andreas Zafiratos
Decklists with this card

I'm surprised this has not received any reviews as yet. This is a straight up good Killer - and those are few and far between. It's cheaper than MKUltra in basically all circumstances, even if you take into account paying to move the program between ice. It's cheaper than Na'Not'K in all but the most stacked servers, and is even cheaper than Mongoose - because it has a higher starting strength and it's limitation is not as easy to work round as Mongoose.

Whilst there is a 2 tax to move it around - if you are working with sustained pressure on one server, and it's hosted on some high rez cost ice - then it's a really good part of a sustained pressure game plan. If they start installing double Anansi on R&D - then this probably means HQ is more open - and you might do well to target there instead!

0 to install, only - those are also good numbers.

I think the downside is that it is Corp trashable - but even this is pushing the Corp into a specific fork - trashing their own rezzed ice to remove your programme - which lets be honest, you are running with Clone Chip, two copies and SMC so isn't a real problem.

I think this is worth splashing instead of Na'Not'K in pretty much every non-stealth Shaper deck. The cards that support it's downside are possibly too much to transfer this to other factions - but at 2 influence - it could be worth it.

(NAPD Multiplayer era)
Bokonon 13
Ika was designed to be a great counter to high-str/high-sub sentries - 6 to break Anansi, 7 to break 8-str Surveyor, 8 to break Archer range from very solid to straight-out amazing. However, similar to Laamb, it's #s vs. small/medium ICE aren't great: 5 for News Hound, Data Raven, Cortex Lock, Jua, Turnpike, etc. — BlackCherries 5 Nov 2018
Note: You can put it on Architect, as the corp can't trash it — 5N00P1 23 Dec 2018