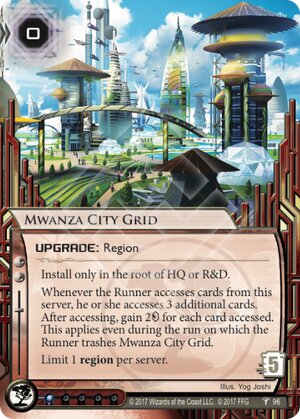 Whenever the Runner breaches this server, they access 3 additional cards. When the breach ends, gain 2credit for each time the Runner accessed a card during that breach.

Illustrated by Yog Joshi
Decklists with this card

I'm a Jinteki man, and this is my favorite card in the deck. Mwanza City Grid can be a powerful force of economy, defense, and damage, potentially all at once. A runner taking 4 accesses plus the grid itself produces 10c from a 0c card, and it either survives to do it again or the runner trashes it for 5c of their own. A 15c swing is powerful. Account Siphon powerful. Of course, power like that has never come without a drawback.

Jinteki's game plan doesn't always involve keeping the runner out. It might be making accessing too risky or too painful to do. They're the faction of Komainu, Neural Katana/EMP, Snare!, all that fun stuff. Porous, but dangerous. Mwanza City Grid is a natural fit. Multiaccess against jinteki has always been a risky proposition, and the corp actively offering more accesses should come across as more suspicious than a nun with a boner. A runner may simply choose not to run a server you've placed this on. I always run 3, even though you can only have 2 installed, because seeing it early is always a boon, and one usually gets trashed by the time the third one is drawn.

As for running it in other factions, Mwanza technically only costs 1 influence. I say technically because it begs to be run with ambushes, and I'm not afraid to say that Jinteki keeps the best of those as well. Bringing in a pack of snares will set you back another 6 influence. I don't actually play many decks outside Jinteki, but Haarpsichord Studios has some amusing synergy. Since the runner can't steal more than one agenda a turn, feel free to show them as many as you'd like, and maybe profit off that too.

Yes, I am absolutely enamored with this card. I cannot sing its praises enough. But, the obvious downside: More accesses means more agendas stolen and more assets trashed. You can turn those into punishment too! Weyland in particular has some wonderful options. However, when the runner is sitting pretty on a full grip and game point, you may regret having these grids rezzed. So, advice: You usually want to install on HQ first, since you can curate what's in your hand much more easily than what's on top of your deck. Leaving a mwanza server completely unchecked can result in ruin pretty quickly.

(Reign and Reverie era)
SageTellah 18
It also has some incredibly useful synergies out of faction if specced right, with IDs from every faction (Argus, Haarpsichord and Sportsmetal) having abilities which can potentially take further advantage of it. — OneQuarterPower 24 Aug 2018