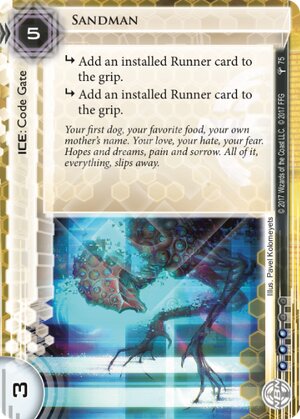 subroutineAdd an installed Runner card to the grip.

subroutineAdd an installed Runner card to the grip.

Your first dog, your favorite food, your own mother's name. Your love, your hate, your fear. Hopes and dreams, pain and sorrow. All of it, everything, slips away.
Illustrated by Pavel Kolomeyets
Decklists with this card

As a long time NBN player, I always look forward to critically examining each new ice my favorite faction gets and deciding whether it gets to replace or compliment my existing choices. This pack has two yellow ice, fresh of the press. The much talked about Endless EULA is one of them, and while I don't know if it is as good as some people say it is, I definitely think it has some value as a Paperclip counter and another powerful barrier for NBN. The other ice is this one, and... yeah this will be a quick review.

If Yog were still with us (may it rot in hell where it belongs), everyone would immediately laugh at the mere existence of this card and immediately resign it to the back pages of their binder. But even without Yog, I don't think this card has much value. First off, the numbers on it are not fantastic. 5 to rez, 3 strength. Black Orchestra breaks this for 3 credits, which is laughable. Other popular ice breakers like Gordian Blade, Abagnale or Refractor also go through it for less money than the rez cost, and Aumakua gets within the Sandman's range in no time.

But it has two subroutines, are they worth it at least? In theory, yes, in practice, no.. Getting to choose two cards to bounce is very powerful. The problem is, that this ice is very distinctly a mid game ice. In the first few turns it does very little, and turn 1 the runner can face check this with impunity. Runners tend to run first and install cards with their third and/or fourth click. Late game this could theoretically be devastating, sending expensive cards to the grip, but by then the runner will be able to easily break this. So you need a good moment to rez this, when the runner has at least 1, and preferably two, quite expensive cards installed. In that case it will be a great way to make them lose tempo. But it doesn't stop them outright, and like Archangel, they can even ignore this card after a while and just keep hammering your servers and win.

Is it complete ass? No, but in the current meta this card is simply not worth a slot. Maybe if you are a filthy rich corp, and can afford 5 credits to crush the runner's tempo in the early game. But even then there are probably better alternatives.

(The Devil and the Dragon era)
Cpt_nice 1580
Archangel is just a better version of this card. This takes a stroke of luck to have these subroutines fire. You would need to play cards that enhance ice, like sandburg or helheim servers to see this fire reliably. — Severijn 19 Apr 2018
Out of curiosity, would people try to make this card work if it instead sent the cards to the top of the stack? — LynxMegaCorp 19 Apr 2018
Maybe I would run a single copy in Azmari. — Cpt_nice 19 Apr 2018
I think sending the cards back to the hand is already pretty punitive as is. The subroutines are actually already very strong. it is just that you can't have this fire without going through some hoops. It would also be better from a faction with less punitive ice like weyland. I have found watchtower pretty playable because nobody really expects weyland to have code gates with back-breaking subroutines. — Severijn 20 Apr 2018