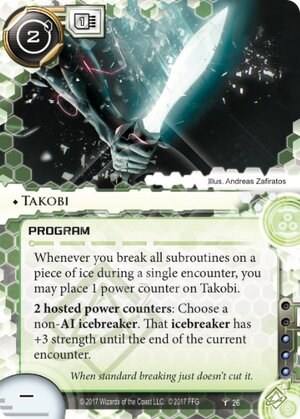 Whenever you fully break a piece of ice, you may place 1 power counter on this program.

2 hosted power counters: Choose 1 installed non-AI icebreaker. That icebreaker gets +3 strength for the remainder of the current encounter.

When standard breaking just doesn't cut it.
Illustrated by Andreas Zafiratos
Decklists with this card

OK, first review so let's give this a shot :)

Takobi is a nice little support program that really caught my eye when the pack was first spoiled. Some players called it the Shaper's Datasucker card and that is the case but with notable differences. First off, the card can't be purged of counters since it gains power counters. The only main way to stop Takobi accumulating counters is to trash it. Takobi also does not gain counters on successful runs. It gains them as you break ice, and you have to break all subroutines to get a counter. So, for example you can't just break an Enigma on last click and save a credit if you want a counter - you need to break both.

Once you've broken all the subroutines on 2 pieces of ice, you can boost any non-AI icebreaker up by 3 strength during an encounter for 2 counters. The fun comes when you break all the subroutines on that ice. Yep, you get a counter back. So it starts to recharge itself after being used up. There's no limit to the number of counters you can accumulate either so you can stock them up for a run on a heavily fortified remote with the aim to save some credits and attack from a lower credit count, costing only credits to break subs. If you only ever stock 2 counters, you get a bonus +3 strength for any non-AI icebreaker with Takobi on every 2nd piece of ice encountered (except after the install, which only gives the boost on the 3rd ice). Thanks to Krams for correcting me there

Now, there are a couple of problems. If your area is full of asset spam or light-ice/rush type decks, then this is a dead card. However, if your opponent is playing a more glacier style deck or heavy strength ice like Tollbooth, then this is where Takobi starts to get better as you save credits on the strength boosts if you can charge up. Also, it still costs real credits to break subroutines so if you're up against a lot of multi-sub ice, then this doesn't help too much (though temporarily boosting a Gordian Blade to tackle a Fairchild 3.0 works wonders to reduce the break cost to 3 credits).

Some synergies that might help include Kongamato, which you can use to break a single subroutine on 1 ice and get a counter for Takobi. If you want to go all in on Takobi, Cyberdelia will give you credits back to get counters for the first piece of ice you break. A fun interaction is with System Seizure, which can be used to get around Takobi's clause where the icebreaker doesn't retain it's strength when boosted with Takobi.

At 3 influence (compared to 1 for Datasucker), this probably won't see play outside of Shaper. I like this card for what it does and I hope some extra support comes in the remaining Kitara cycle cards (written as of Council of the Crest - pack 3) but playing it is dependant on whether your local area is glacier or asset spam heavy, which is probably why the card won't see too much play just yet.

Oh, and remember, you can't boost AI's with Takobi so Aumakua (for example) can't just recover from a purge with this.

(Council of the Crest era)
HiddenAway 929
If you only ever stock 2 counters, you get a bonus +3 strength for any non-AI icebreaker with Takobi on every _2nd_ (not 3rd) piece of ice encountered (as soon as you have your first counter to begin with). This is awesome if the enemy has a few smaller pieces of ICE mixed with some high strength ICE. — Krams 19 Mar 2018
You're right there. That said, it is the 3rd ice from the install and every second thereafter. I'll edit the review. — HiddenAway 19 Mar 2018
I feel like this is a sneaky boost for Stealth. Break first ice for cheap, power this up to fall back on to continue aggression. — LynxMegaCorp 20 Mar 2018