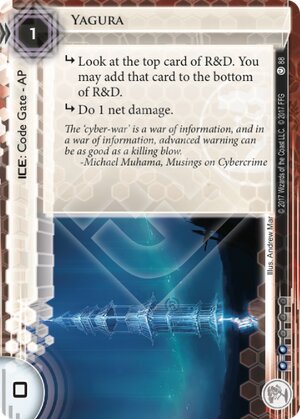 (Order and Chaos era)
umbralAeronaut 786
Leaving the card on top, definitely for Jinteki Masterminds, true. I can play Jinteki but I play a different more brute force Jinteki, I can't bluff well, or BS as I call it. But definitely, since Yog.0 is on hiatus do to Lotus Field, I came across this lovely myself when re-analyzing all the Code Gates we can now use, due to Yog.0 departure. And don't tell me people are going to start using Yog.0 again, cause I just bought my third Upstalk Data Pack, so that makes 9 Lotus Fields at 1 INF, so you can bet all 11 of my Corp decks are getting 1 even if I have to swap 2 still! HA! — rezwits 16 Feb 2015
I think Yog.0 actually still has a lot of play in it. Shaper splash cards like The Personal Touch and Net-Ready Eyes (in the upcoming SanSan cycle) mean that either shaper or anarch have potential inroads to make Yog.0 workable. I don't think that Lotus Field and cards like Yagura will ever be bad, because forcing the runner to install and support their Yog.0 is a fine goal. It's important to at least think about the possibility of facing that card whenever discussing a Code Gate however. — umbralAeronaut 16 Feb 2015
5