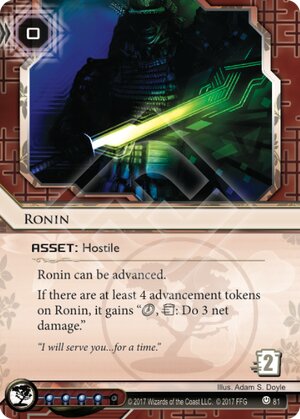 click, trash: Do 3 net damage. Use this ability only if there are 4 or more hosted advancement counters.

"I will serve you…for a time."
Illustrated by Adam S. Doyle
Decklists with this card

A staple of Jinteki kill decks, this card relies on the fact that a ‘failed trap’ is often left alone. Install and advance advance and a runner will go after the card, assuming it to be an agenda. Install and advance only once, and the runner will stop to consider, look at the board state - maybe they won’t run. Maybe they will assume it is a trap and let it be. A few more slow advanced turns and all that is left is waiting for the runner to drop below three cards in their grip.

In combination with Industrial Genomics: Growing Solutions this is a rather common strategy, boosting the trash cost to high levels, in combination with Shock!s in archives and Hostile Infrastructure as an additional cost, leaving a runner in a potentially bad state. Ronin has other uses, and when played in the right manner is a great way to snag a kill.

(The Underway era)
lynkfox 379
I ran a triple advanced Junebug for fear of a Ronin. It could have been an agenda; that would have been nice. But I perpared for the worse, got my hand to 6 by first click then ran the possible Ronin. — LemLuthor 21 Oct 2016
*prepared; *worst — LemLuthor 21 Oct 2016
This is a great target for Mushin No Shin, being able to do the 4th advance before passing your turn. Four advanced face downs are very threatening, especially if you have at least three credits. It's great this signature threat is not rotating, but it has the downside of telegraphing your kill, and giving the Runner a window for paid abilities that other kill options don't. That said, I'm glad it is sticking around because its existence forces threat calculations. — cynchwyrm 14 Sep 2017