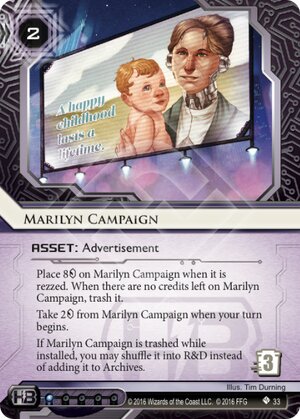 When you rez this asset, load 8credit onto it. When it is empty, trash it.

When your turn begins, take 2credit from this asset.

interrupt → When this asset would be trashed, you may shuffle it into R&D instead of adding it to Archives. (It is still considered trashed.)

Illustrated by Tim Durning
Decklists with this card

Sure, this card might have the HB color. And sure, it might fit the line-up of campaigns for creepy androids. But don't be mistaken, this is a yellow card in disguise. In faction, HB would much rather combine Adonis or Eve with their beloved Breaker Bay Grid for maximum profit. But you know who will love this card? Your favorite intrusive advertising company

Yes, this card was made for Spark. Before TD, their main money making advertisements were Launch Campaign and PAD Campaign, both obviously great cards but 6 cards were not enough to tax the runner and provide reliable economy. Slotting just one Adonis and Eve would set you back 2 or 3 influence respectively, and was quite an investment. Spark likes free or cheap advertisements, to tax the runner on both their turn and the corp's turn.

But now here comes Marilyn. It immediately pays for itself, it has a respectable 2 rez vs 3 trash cost (compared to 4 - 3 for Adonis) and it only costs one influence! Not only that, when it gets trashed while installed, it will shuffle itself back, giving you an opportunity to use it again as well as fattening up R&D for when the runner goes on Medium digs. Or, of course, you can let it get trashed and recur it with Friends in High Places, another HB card for a mere 1 influence.

Watch out for Salsette Slums though.

(Terminal Directive Cards era)
Cpt_nice 1581
Oh man! With CPC Generator and Product Placement, Spark has like 15 rez-on-demand ads! Plus Friends! For only 6 inf! — PureFlight 2 May 2017
In faction, HB would much rather combine Adonis or Eve with their beloved Breaker Bay Grid for maximum profit. — sekoku 11 May 2017
^Ugh, it posted when I wanted a new line. In any case: I don't think I agree. For me, I use Marylin over Adonis or Eve (depending on the meta/sets/etc) simply because if the runner runs it: I rez it for 2, they can trash for 3 (one more than my rez cost) AND get the ability to shuffle it back into my deck with no Jackson/et. al. compared to Adonis or Eve. For me, it's a better card on that reason alone. — sekoku 11 May 2017
I guess it depends. The new asset spam HB with Estelle Moon probably runs 3 of this. Traditional Foodcoasts glacier runs Eve/Adonis + BB — Cpt_nice 12 May 2017
@sekoku 11 - The card doesn't need to be rezzed to return to R&D. The clause is only as long as it's installed, which if it's in a server then it is. Save yourself the credits. — ArcticLancer 16 May 2017
@arcticlancer - Actually according to the UFAQ it must be rezzed for that ability to be used. The card is not active if it is not rezzed. — deprod 16 May 2017
@deprod I don't expect that ruling to make it into the official FAQ, as that ruling means the CEO's have no downside to just being thrown in a server unrezzed. — Amputret 17 May 2017
@Theyos The executives say "trashed while being accessed" which is not the same. The UFAQ ruling is straight from the rulebook, as abilities are only active when rezzed (or stated otherwise, which Marilyn does not do). — mbzrl 19 May 2017
@mbzrl "trashed while being accessed" is irrelevant, the point is the UFAQ ruling states that a card's text has no meaning unless it is rezzed "The abilities on a card are only active while the card itself is active." Thus unless the CEOs are active their text is not active either. — Amputret 21 May 2017
@Theyos I see where you're coming from. Because the access is mentioned in the ability though, it makes more sense to group it with other abilities that are active during access (like snare, shi.kyu, news team; complicated by shock which states that the ability works even when not installed, unlike the others). So we do have examples of access abilities that are active, and I that is the relevant difference between Marilyn and Director Haas — mbzrl 24 May 2017
My question is, if the runner doesn't trash her and lets you get all 8 credits, does she shuffle herself back in in that circumstance? Because she doesn't say "if the Runner trashes Marilyn Campaign while it is installed", just "If Marilyn Campaign is trashed while installed". Her own ability activates while she is installed, and trashes her, so it would seem that the /only/ way for her to ever see Archives is being trashed from HQ or by the runner while unrezzed. — Rhaplanca1001 16 Jun 2017
@Rhaplanca1001 yes, if u use up the creds, she can be shuffled back into R&D as she is trashed when there are no creds left. — supercatfish 11 Sep 2017