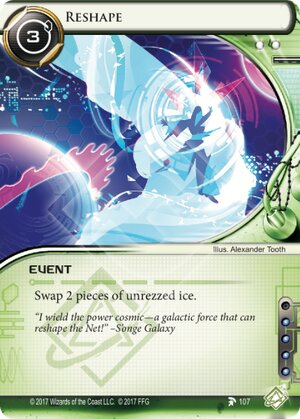 "I wield the power cosmic—a galactic force that can reshape the Net!" -S'onge Galaxy
Illustrated by Alexander Tooth
Decklists with this card

Now for the more complete examination because of the 200 character minimum:

Three credits is expensive, and it doesn't let you swap rezzed ice, making it largely useless, as excluding derez effects, Reshape swaps one unknown layer of defence, that you presumably have yet to let the corp rez, for another unknown piece of ice, that you have no reason to think is going to be any cheaper to break; let alone be enough cheaper that you are going to get the money back for playing this card, let alone including it in your deck.

This probably worked on all ice in early testing, but either was misprinted, or was nerfed and didn't get tested properly after the nerf.

(Crimson Dust era)
Quarg 255
Seems to me that it was nerfed because it seemed to oppresive with Inversificator. — Capstone 22 Aug 2017
If it was only 1 influence it would be somewhat useful in crim, but as it is it requires either derez/expose (crim stuff) in shaper or VERY expensive import in crim. — Silv 22 Aug 2017
1

This card surprisingly has been given some life due to it perfectly targeting Jinja City Grid installs.

If you expect Jinja in your meta (especially when it's combined with Surveyor), this card has no restrictions for ice-swapping (besides the material play cost) unlike restricted card Inversificator or make-a-successful-run-on-HQ Escher.

Unfortunately, one of the two pieces of ICE swapped will likely still be unknown to you but I never said this card was good, now did I?