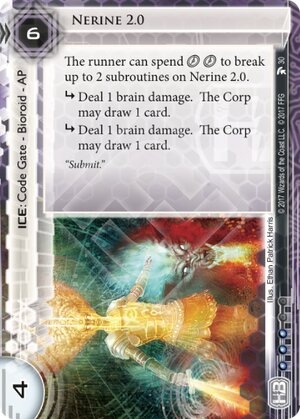 The Runner can spend clickclick to break up to 2 subroutines on Nerine 2.0.

subroutine Do 1 brain damage. The Corp may draw 1 card.

subroutine Do 1 brain damage. The Corp may draw 1 card.

"Submit."
Illustrated by Ethan Patrick Harris
Decklists with this card

The obvious comparison here is the popular Fairchild 3.0 (FC3) which has the same rez and influence cost. Compared to FC3 Nerine 2.0 is one less strength and one less sub. On the bright side the subs on Nerine 2.0 bite hard whereas the first two subs on FC3 are usually more taxing (3 or trash an installed card).

A big problem with Nerine 2.0 compared to FC3 however is that there's a difference between and . Nerine 2.0 can be safely run with 2 clicks left, assuming the runner hasn't clicked through other bioroids first that means it can be run as first or second action of the turn. FC3 however can only be safely run on the first action. That makes it significantly more likely that the subs on FC3 will actually fire.

Since Nerine 2.0 is also a strength 4 compared to the strength 5 of FC3 it's easier to break. With some breakers that boost in increments of more than 1 it's even a big difference (Black Orchestra, GS Striker M1, Passport, the upcoming Abagnale).

In the current meta the runner will expect unrezzed ice, especially against to be Fairchild 3.0. If the runner is capable of breaking the "brain damage or end the run" sub of FC3 they are usually capable of breaking Nerine 2.0 as well (the exception is that D4v1d works against FC3 but not Nerine 2.0). Meanwhile FC3 in general is more taxing due to one extra strength and an extra sub. So I don't really see the value of Nerine 2.0.

Maybe someone in the comments can enlighten me.

(Station One era)
Silv 315
Str 4 or 5 is not a big difference for Peregrine. Other than that little detail, I totally agree with your review. The subs are very strong if they fire, but very unlikely to ever do. Maybe using it in a brain damage deck alongside Markus Batty? Meh... — Krams 29 Mar 2017
Good point, I'm apparently even making off-by-one errors in my review now. Edited, thanks. — Silv 29 Mar 2017
With each new pack code gates are looking more and more like sentries. The design philosophy seems to have shifted from weird/end run code gates to just plain nasty ones — DGB123 14 May 2017