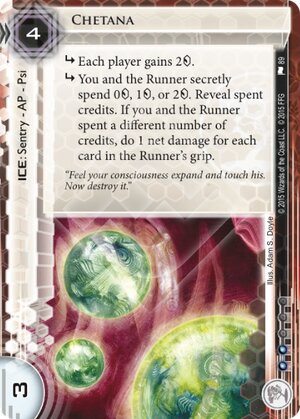 "Feel your consciousness expand and touch his. Now destroy it."
Illustrated by Adam S. Doyle
Decklists with this card

All I can say about this card is that if it, or Little Engine, ever get popular, I'm going to start running 1x Panchatantra in every Shaper stealth deck.

I agree it shouldn't be allowed, but can anyone show a rule that says it isn't allowed?

(Fear the Masses era)
daytodave 1204
I don't see the point... What am I missing? — LynxMegaCorp 20 Jun 2016
Gingerbread? — LynxMegaCorp 20 Jun 2016
Well the main similarity between those two ICE is the subroutine that gives the Runner creds, but I don't see what that has to do with stealth OR Panchatantra... — LordRandomness 20 Jun 2016
I believe the idea is to add the Stealth subtype to Chetana, so that when you spend the credits it gave you, you are "spending credits from a Stealth card". (Kind of. Not really.) — Toper 20 Jun 2016
Unfortunately, if it follows the same rules MtG does you can only put ICE subtypes onto ICE with Panchatantra. Otherwise there's a bunch of other nonsense you could probably do...plus, "credit from a stealth card" probably requires the credit to be taken directly off a stealth card and paid rather than going via your credit pool (i.e. it must be a recurring credit) — LordRandomness 20 Jun 2016
Actually, you can give a piece of ICE any subtype you want, including "pineapple" or "pink-striped". That's why the Enforcer trick works. — HolyMackerel 20 Jun 2016
Should be posted in Panchatantra tricks but, as they say, it's still confusing which type of subtypes can you add until they get an errata http://fetal.ai/post/137772114031/five-weird-panchatantra-tricks-corps-dont-want — valerian32 20 Jun 2016
Well, I did say if. What's the Enforcer trick? — LordRandomness 20 Jun 2016
The En for trick is to give Enforcer 1.0 the subtype Cosole when you have none installed, thus forcing it to trash itself. — HolyMackerel 21 Jun 2016
Anyway, the creds are not taken from Chetana. The ICE being stealth adds nothing of interest. I have no idea if it should be allowed, but is is not. — therealwarrior 17 Dec 2016
This idea, while creative, definitely does not work. Stealth breakers indicate that you must spend credits "from a stealth card". If you were to give this ICE a stealth subtype, you would be gaining credits from it, but you're not spending credits from the card. Credits in your pool have no other information attached to them. They're just credits. Stealth credits are spent directly from a stealth card. Don't let Jinteki.net fool you. You don't grab a credit from a stealth card and put it in your pool, then spend it as a "stealth credit". They are credits, spent from on top of a stealth card. — brett_cate 9 May 2017