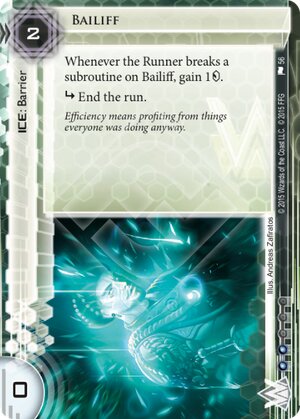 Whenever the Runner breaks a subroutine on Bailiff, gain 1credit.

Efficiency means profiting from things everyone was doing anyway.
Illustrated by Andreas Zafiratos
Decklists with this card

The benefit of a Pop-up Window combined with a hard End the run. subroutine. This card is best suited for all the same purposes that you would use a Pop-up for. Tax/econ swing on centrals and a cheap tax ice to defend econ assets. The downside compared to Pop-up is that it will cost two influence outside of Weyland.

Now it may be tempting to start adding Sensei, Marker, TL;DR or Sub Boost to this to maximise the economic benefit. Don't do it. You will be gilding the very breakable and Parasite vulnerable lily by trying to boost the number of subs on this ice whilst filling your deck with substandard positional ice. If you really want to 'double' the effect you may as well just play a second copy, or a Pop-up, or both. Even better, just add more econ cards to your deck, you won't regret it.

Just remember that installing any Fracter apart from Cerberus "Lady" H1, Aurora, Battering Ram or GS Sherman M3 will effectively turn Bailiff into a Pop-up, so it can't be used to defend anything that's really valuable.

(Democracy and Dogma era)
Zakalwe 477
I'd consider using sub boost on it, maybe. But yeah, definitely not positional ice, cause it'll be out of place after the parasite install. — quailman2101 2 Apr 2016
So, assuming it doesn't get parasited down, it's pretty much early game defense, late game money? — taneru 2 Apr 2016
Bingo. This thing becomes as much of an econ card as Pop-up, which is pretty good. — Chuftbot 4 Apr 2016
2

In-faction, use this basically like you would a gear check Ice Wall. If 3 bailiffs are your only Barrier ICE, then you've got the gear check ETR in place and after they get out their breaker / fracter and start going through it, it turns into effectively a pop up window income stream. You are a little riskier playing this as your check compared to an ice wall, since it costs one credit more and is 0 str so it dies instantly to a parasite; if you rez it, they bounce, and immediately parasite you're worse off than you would be having used an ice wall in the same situation. But with Parasite and clone chip on the MWL, you can at least find small satisfaction in this thing soaking up one of the three to five parasite firings, I guess.

I can't imagine any reason you would ever want to splash for this over a Pop-up Window at 2 influence, but in faction I can see a lot of use for it. Especially given how awful Weyland can be to the runner when you're rich, and how hard it can be to GET rich as any alternative weyland ID that isn't Blue Sun: Powering the Future. Those extra credits from bailiff really add up...

Despite the obvious interaction, I can't imagine Sub Boosting this unless you are 100% certain you're playing against someone with very limited supplies of ICE destruction and card bounce, but if you ARE certain this can become a quite annoying little source of economy sitting on top of your R&D or HQ.

Keep your eyes peeled for further interactions in the rest of the mumbad cycle, this has the potential to be a nice little bump for all sorts of Weyland decks. If you're including an ICE wall in your wey deck with no particular plans to exploit the advancability, consider swapping this in instead.

(Democracy and Dogma era)
Sappo 26
In faction pop-up window with gear checking abilities sounds fun to me. Get to take my pop-ups out and use the influence on something meatier. — mmik 27 Apr 2016
2

If you can swing the Influence, this is one of the best direct replacement cards in Netrunner, as it's so drastically superior to Pop-up Window. The number of early scores I could get out in an HB or NBN deck from having a hard ETR gear check is crazy. Really cool card, not overpowered, not crazy, but just good enough to get excited about if you were running Pop-up before.

Usually I prefer vainila or ice wall for gearcheck, but this, as you say has the advantage of being profitable in the long run.

This fills a different role than Pop-up and is not a replacement. Both are fine, but each their own way.