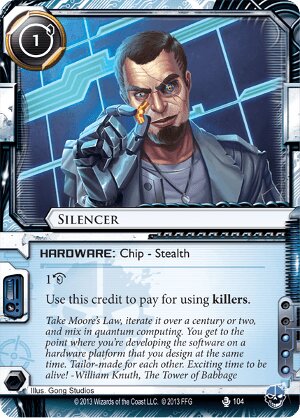 Use this credit to pay for using killers.

Take Moore's Law, iterate it over a century or two, and mix in quantum computing. You get to the point where you're developing the software on a hardware platform that you design at the same time. Tailor-made for each other. Exciting time to be alive! -William Knuth, The Tower of Babbage
Illustrated by Gong Studios
Decklists with this card

Part of a cycle of stealth chips, the other two being Dyson's Fractal Generator and Mac's Lockpick, they are not terrible economic choices, paying for itself after one use and saving you real credits in the long haul. Obviously they are most effective when used in conjunction with the stealth breakers BlacKat, Dagger, Refractor, and Switchblade. The stealth chips are also high on influence, limiting the potential ease with which a 'pure stealth' deck can function, as importing them leaves precious influence to spare, which is a good thing in my opinion. As a two-of in a standard criminal deck that wants some support for its killer of choice, Silencer helps.

The art, however, leaves me disappointed. DFG and Lockpick both depict a close up of the chips in all their glory. DFG in particular has some amazing artwork, reminiscent of LLDS Processor. But here we have Gabe, holding up what looks like a tiny revolver-shaped chip, backed by some conspicuous holo-grid as he eye-balls it hungrily. Sorry, but I'm not feeling it. As cool as Gabe is, this artwork doesn't do him justice - much less the Silencer - which is a shame, doubly so considering Studio Gong did LLDSP and DFG.

(Data and Destiny era)
Drugs 22
The art is especially disappointing when the flavour text is this good - sure, the other two are more personal, but this shows what hardware can really mean in the Android world — MattOhNo 18 Sep 2017