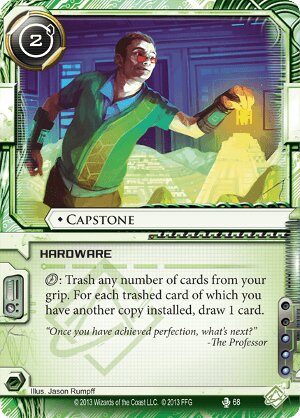 click: Trash any number of cards from your grip. For each trashed card of which you have another copy installed, draw 1 card.

"Once you have achieved perfection, what's next?" -The Professor
Illustrated by Jason Rumpff
Decklists with this card

This card probably wins the award for "worst theme/mechanics pairing" in the game so far. This is a card which, mechanically, rewards the player for including multiple copies of redundant programs, resources, and hardware in their deck. But the picture on the card is The Professor, an identity whose very ability makes this impossible, as he is only able to run one-ofs in his deck.

For Capstone to be worth triggering, you have to be holding at least one card in hand which you already have installed and don't want to install again. Typically, this means unique or psuedo-unique cards (i.e., cards which provide no benefit after the first, like Magnum Opus or most icebreakers), although maybe you might throw away your second and third Akamatsu Mem Chip if you only need +1 .

It's easy to see, then, that what you're doing here is recycling dead draws. Normally, if you already have an Astrolabe or Professional Contacts installed, drawing the second or third copy of these cards is a wasted click; your only options are to hold it to soak up damage, or overdraw and throw it away. But with Capstone, drawing a dead card isn't a complete loss, because it can be turned into a fresh new draw.

It's not a perfect recycling, though. Using Capstone's ability refunds you the dead clicks you've already lost, but costs a click to do so. This means that, if you're only going to be recycling one card, it's probably not worth it. Instead, you should wait as long as possible, playing the cards you can and letting your grip fill with redundant copies, before finally dumping them and rebounding into a fresh new hand of cards.

So, what kind of return are you looking at with this card? It costs you one click and two credits to install Capstone, plus one click every time you use it; if we equate that 1=2, and assume that you recycle 2 dead cards per usage of the ability, you will need to use the ability twice to break even.

This assumes, though, that you have 4 dead draws to begin with. Now, Capstone is itself a unique card, so putting in 3x will give you two dead draws in your deck, but that's not enough to justify its inclusion. You need to already be running many copies of redundant cards...which is something you typically avoid when building a deck.

Capstone alleviates some of the problems associated with combo-heavy decks, particularly those reliant on unique resources like Aesop's Pawnshop. As such, it can be thought of as a jank-reduction card: it can't turn a janky deck into something tournament-ready, but it can give it an edge in your casual games.

Of course, if your dead draws are primarily programs, you could instead use Freelance Coding Contract, which turns them into credits instead of cards. Or, maybe you just don't want dead draws at all, in which case Paige Piper can help you with that.

Just remember; the card art lies. Do not put this card in The Professor. It will not work.

(Chrome City era)
tiedyedvortex 4679
well, you just can't put in non shaper influence, you could surely put in a bunch of hardware or resources or something, and cap them away, finding your out of faction influence with the prof. — cmcadvanced 17 Jun 2015
There's the other (obvious) use of it too as an adjunct to a replicator build. Especially in the era before Tysons. — BountyHunterSAx 17 Jun 2015
Click1: Install capstone->replicator x2. Click 2: Capstone -- draw 2, discard 2 capstones. Click 3: Install one of your draws, replicator x2 Click 4: Capstone again! — BountyHunterSAx 17 Jun 2015