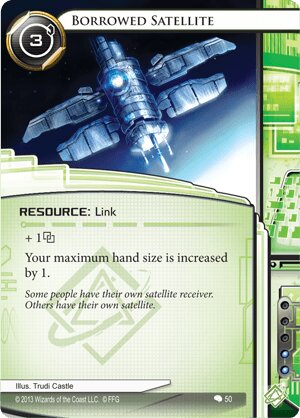 Your maximum hand size is increased by 1.

Borrowed Satellite is one of those cards with a very, very narrow set of decks it works with. This is largely due to the fact that Public Sympathy and Access to Globalsec exist. For the cost of one additional card, but no additional , you get more benefit (+2 hand size from PS) from two cards that cost no influence. And in-faction, card economy is relatively trivial for Shapers, with Diesel, Quality Time, Professional Contacts, etc.

So, I don't see this ever being used outside of Shaper decks. But even there, where is it useful? Well, do you have Underworld Contact in your deck? Do you also have Personal Workshop and Stimhack in the deck? Okay, then this could probably be justified, if only in small quantities. But even there, unless you're very cramped on deck space, I still might pass it up completely in favor of Public Sympathy plus Access to Globalsec.

What's that, you have Career Fair too? Okay, finally you may have made a case, but wouldn't you really rather spend the Career Fair on something else, or drop it entirely for influence on something else? So yes, the uses for Borrowed Satellite are few and far between. While there are a few places where it may see the light of day, but it's doubtful it'll ever be in large quantity, and more often than not, just to save a slot for some other card.

(The Universe of Tomorrow era)
Pikeman 275
Potentially, if you want link, already have access to globalsec and are looking for something else to add link... except there's Rabbit Hole, Dysons, and The Helpful AI, all for cheaper Credit or Influence-wise... you really have to want THIS. — Goldstep 19 Oct 2015
Seems like it was originally created as an anti-Scorch tech card - get link to beat SEA Source traces, and get some more cards in hand to survive the hit. Today, there are MANY better options. — Bigguyforyou518 19 Oct 2015
On the plus side it not only decreases the necessary cards but also the clicks necessary to install it. That said neither of the effects is particularly strong, especially the hand size maximum is/was an imho overvalued stat by FFG. If you want hand size you run Box-E, if you want link you run rabbit hole. — Capstone 19 Oct 2015
@Bigguyforyou518 Agreed. I think this would be an option if it only cost 1-2 creds, as you're basically getting two weak effects but on one non-unique card. I think you'd want to have 2-3 installed to see benefits, but 3$ each adds up fast for minimal gain. If you're shaper, it should be a no-brainer to run this over AtG, but it's too expensive. @Capstone, I think you're right about FFG's opinion of hand size, and passive benefits that don't help to further you winning like this are hard to find deck slots for. — PureFlight 10 Mar 2016