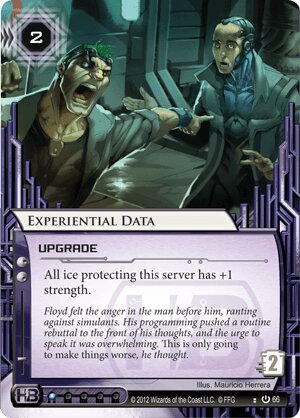 All ice protecting this server has +1 strength.

Floyd felt the anger in the man before him, ranting against simulants. His programming pushed a routine rebuttal to the front of his thoughts, and the urge to speak it was overwhelming. This is only going to make things worse, he thought.
Illustrated by Mauricio Herrera
Decklists with this card

At first glance the (somewhat) blanket boost to all ICE in that server is a good thing right? It would mean each piece costs at least one more credit to break, making more taxing options, and might take some pieces out of fixed breaker ranger. Seems like this could be a very useful card. Unfortunately the reality Netrunner is that you cannot keep a runner out, only delay them from getting in. So this upgrade becomes very worthless, at most taxing the runner for a single run before they trash it.

That is where the big weakness lies - With only a two credit trash cost this card will go quickly after a successful run is made, and won’t offer any lasting benefit. It hasn’t seen any impactful play because deck space, even as far back as the core set, in corp decks is so tight.

With a deep enough server maybe this card could hold out the runner for a single extra turn. Maybe it could be used to draw the runner into a run where they only have barely enough credits to pass, and that +1 strength will force them to hit an ICEs subroutines. The drawback of course is that the runner might just jack out if they can’t get much further in. This in turn means that it could only really impact the ICE that the runner was encountering when the corp rezed Experimental Data. That logically follows it would only work if the runner had exactly enough credits to break through, not even one extra.

Corporate Troubleshooter does that far more effectively, and the tax that Experimental Data theoretically applies is only good for a run, maybe two due to its low trash cost. That would be why this card has see so little impact on the game as a whole, and why it most likely won’t in the future as well.

Experimental Data could be very useful if building a super server the runner would have to access multiple times to be able to truly do anything. Caprice Nisei plus Ash 2X3ZB9CY makes for a server that has to be run usually at least 3 times before access to whatever other card is in it - adding Experimental Data would give at least a credit tax for each piece of ICE. Experimental Data could also be used as a cheaper influence alternative to either Ash or Caprice, in making the runs harder to accomplish with even two runs. Still, that's one more card for the combo, and harder to set up. Might be worth the consideration however.

I'm going to miss Experiential Data even though it is:

But it has some of my favorite flavor text in the game.

Firstly, it gives a wonderful peek into the mind of one of my favorite characters in the Android Universe: Floyd 2X3A7C (a playable character in the Android board game and also seen on the art for Successful Field Test).

Secondly, I said I liked Floyd, and the flavor text for Experiential Data just makes me so proud of him! Not only is he learning to better himself, but he is also subtly rebelling against his programming.

Thirdly, I like the way the flavor text ties into the mechanics of the card. Most of your bioroids in the game are ICE, and this card makes your bioroid ICE stronger. This makes sense, experience has made Eli better at their job so they are harder to get past with breakers. But experience also humanized Floyd, and it can humanize your bioroid ICE too. If you have Experiential Data down, it becomes more enticing for the runner to just talk to your bioroids and hug it out (aka breaking with clicks).

Thankfully, a card doesn't have to actually be legal for tournament play just for you to read and appreciate its flavor text, and the flavor text on this card is by far the strongest and most fun part of the card.

I have played netrunner for months now and still did not know that there was a board game, thank you for telling me this.

With the release of Net-Ready Eyes in Chrome City, Yog.0 and Mimic are coming back into power. To deal with cards outside of their range, it's quite common to see Atman+Datasucker to lower the strength into Atman range.

With that in mind, I see a use for this card in a high-strength punishing sentry deck, such as possibly Tennin Institute: The Secrets Within or Weyland with Grim or Archer. They think they've got enough strength to get through your trash-a-program subs, and then you rez Experiential Data and suddenly you're trashing their most potent programs. Like you planned it!

I admit that it's a bit of a special case, but with the resurgence of fixed-strength breakers, this could go a long way.

(Chrome City era)
thesm17 166
Ehh, I don't buy it. If you want suprise factor, Corporate Troubleshooter will secure the kill better than experiential data ever could. The niche it has over corp. troub. Is that it hits multiple pieces of ice, so a deep server with experiential data taxes more for the cost than a corp. troub. The calculation on that though, is that your server needs to be at least 3 deep to cost more to break than a trouble shooter assuming 1 credit pumping icebreakers, and even then, you're losing out on the variable factor of the helpline guy. (I'm assuming that when they finish the run, the runner destroys both assets on account of their cheap trash cost. Experiential Data gets much stronger on reuse). If you want to beat the fixed strength breakers, can I talk to you about our lord and saviour, Patch? — RubbishyUsername 5 Jun 2015