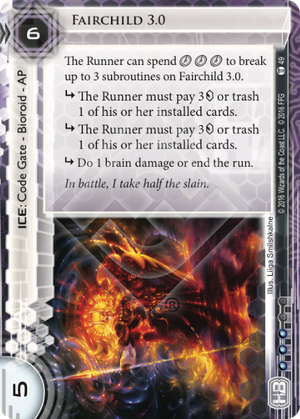 Windave 276
You are right that Fairchild 3.0 does have a more favorable Cost-&gt;Str/Subs ratio than DNA Tracker and Tollbooth, but I'm fairly certain none of the three cards are strictly better than the others. FFG did a great job giving us two new code gates in this pack that both feature highly effective in-faction capabilities for their colors using Tollbooth as a blueprint. They each have a different strength: — umbralAeronaut 18 Oct 2016
Tollbooth - the template around which these other cards were designed, it appears. For nearly all of the most common Code Gate breakers, this will still represent the highest total credit tax to get through, assuming a trigger of it's On Encounter ability (Bypass effects and Hunting Grounds exist as counterplay). It also represents a Hard ETR subroutine that has no alternative means of payment, which can be VERY important especially if it's the only ICE on a server. The face-check is just about the least punishing of all the alternatives however, and it's on the upper tier of cost (8 to rez). Still solid, and dependable. — umbralAeronaut 18 Oct 2016
DNA Tracker - Tollbooth falls on the extreme of Binary Hard ETR in this 'cycle', while DNA Tracker falls on the extreme of Heavy Face-Check Punishment. As shown by the analysis of @quailman2101 in his review, Tollbooth and DNA Tracker are both nearly equally taxing to break. Unlike any of the other ICE in this cycle DNA Tracker will NEVER end the run, it's strengths are singular to Jinteki which uses the threat of death to dissuade access. Where Tollbooth is dependable blocker for your servers, DNA Tracker is a wild caged animal of ICE aggression. — umbralAeronaut 18 Oct 2016
Fairchild 3.0 falls somewhere on the Binary-Taxing scale nearer to DNA Tracker, but it offers the Runner a lot of choice in how to be attacked by it's subroutines. It's the only ICE of the cycle that grants multiple alternative methods of payment, the Runner has a wide spectrum of options between spending 3 Clicks, trashing some unnecessary cards like Fall Guys, paying some credits, etc. The final subroutine places a choice in the hands of the Corporation however, and the bite of Brain Damage OR End the Run is substantial and flexible for the Corp. In exchange for all the flex this card offers the Runner and Corp, it's cheaper by 2 credits and 1 less Strength. Ultimately Fairchild is a powerful tax, but it has drawbacks because it lets the Runner choose the least punishing option out of several unlike DNA Tracker which is utterly uncompromising in it's direct harm to a clueless face-check. — umbralAeronaut 18 Oct 2016
Finally, I should mention Mausolus for Weyland (coming in Martial Law). Mausolus will be the cheapest to rez of this Code Gate cycle, but it has the same Str/Sub ratio as Fairchild WITHOUT a Bioroid clause! Mausolus falls in a strange space in the middle of the Binary-Taxing continuum due to it's ability to be 'upgraded' via advancement counters. Without 3 advancement counters it is merely a grab-bag of irritating face-check effects. WITH 3 advancement counters, it gains a Hard ETR subroutine tied to a Tag, a Net damage subroutine that adds up to the same card loss as DNA Tracker, and a powerful Corporate income subroutine. This one will be hard to truly evaluate until we have our hands on it and see what Weyland can do to work around the Advancement requirement, but the potential is really there especially in Builder of Nations which can add a meat damage to encounter. This is one to look out for. — umbralAeronaut 18 Oct 2016
Great review-as-comment, umbralAeronaut :D — Krams 19 Oct 2016
Great review indeed! I know there is not such thing as &quot;the best&quot; because it is situational. But for me this guy is like the Eli 1.0 of code gates (before mwl) — Windave 19 Oct 2016
I have to agree with Windave's original sentiment that it is &quot;the best&quot; codegate in the game. Here's what umbralAeronaut misses: with a Rez cost of 6 all HB ice is now a turn 1 centrals deterrent with a single click for credit. First turn account siphon used to be a thing against HB. Not anymore. — analogBrad 8 Sep 2017 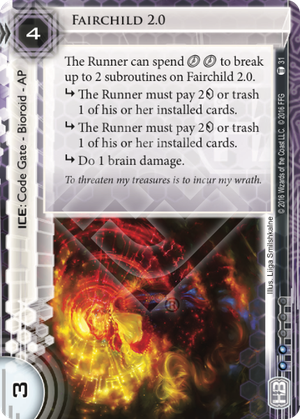 This card is insane. It gives SO MUCH tax for only 4 rez cost, it is really nuts. It even stands up to the tax Eli gives, but not being on the MWL this is a much better alternative. Right now I think is the most taxing bioroid cost-efficiently talking 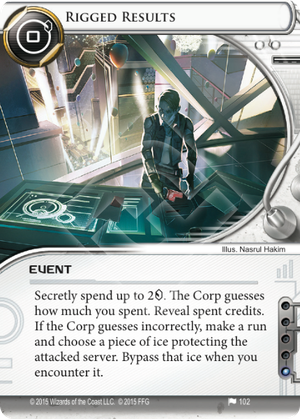 Why this is not Criminal I will never ever understand. Criminals were supposedly the faction that was going to bypass ices. Yet still they do this neutral with influence. Even thematically, this seems shady as criminal.

Windave 276
Game mechanics are not meant to stay in faction for the sole purpose of staying in faction. Deckbuilding design shouldn't be restricted purely out of respect for a faction's flavour. — Akanthinos 30 Jul 2016
Should still be geared towards. Could have been 1 influence Criminal, at least. — LynxMegaCorp 30 Jul 2016
Seems to me that being able to put 6 Inside Jobs (more or less) in any deck, without spending a single influence point, would be broken. — Akanthinos 31 Jul 2016
Oh, because being able to trash 9 Ice without spending influence (cutlery) is okay. ;) — LynxMegaCorp 31 Jul 2016
Only thing is it's not healthy to remedy a broken situation by making something else equally broken. — Tirranek 31 Jul 2016
And besides, there's no real broken situation here, as I don't think full cutlery is even a thing. — Akanthinos 31 Jul 2016
Cutlery is part of why a whole archetype had to have half its influence cut off. — LynxMegaCorp 1 Aug 2016
And yet 2/2/1 ain't full cutlery. The point stands. If Inside Job was a &quot;Limit 6 per deck&quot;, it would be, by far, the best and most used &quot;Limit 6 per deck&quot;. — Akanthinos 2 Aug 2016
That's nearly 6 cutlery that won't cost as much and TRASH ice instead of bypassing. Rigged Results doesn't even guarantee the bypass. — LynxMegaCorp 3 Aug 2016
That's 5 cutlery that, while not costing as much, requires to be used in tandem with a breaker and must target a specific type of ICE. Spooned is deadweight against a barrier. Inside Job (or Rigged Result) isn't. — Akanthinos 3 Aug 2016