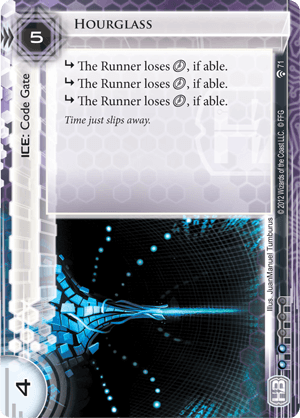 Here's another way to think about this card: Where do you want the runner to run on their last click? Probably into your other, more dangerous Bioroids, Hourglass works as something as a filter ensuring the Runner encounters them without any clicks left. Tags, damage, anything you want to pivot towards. Wyrm is a nice natural counter here as with any 4-strength ICE out of the Anarch set.

fetish 12
How is Wyrm a Counter here (or anywere else)?? To break this Ice with Wyrm costs 16 Creds! Besides, if the runner encounters this and has no decoder to break it, it would be really stupid to continue the run, if there is still an unrezzed Ice behind this, that could possibly be something nasty. — haywire 18 Nov 2015
Let's assume they meant Yogsucker... — LynxMegaCorp 18 Nov 2015
Why use Datasucker tokens when you can use 1 credit to drop the strength to 3, then Yog it? — fetish 18 Nov 2015
It would take 4 credits to drop Hourglass down to 3 strength with Wyrm. (Wyrm is 1 strength, so 3 credits to pump it to 4 strength and 1 more credit to lower Hourglass.) — the_nacho 18 Nov 2015 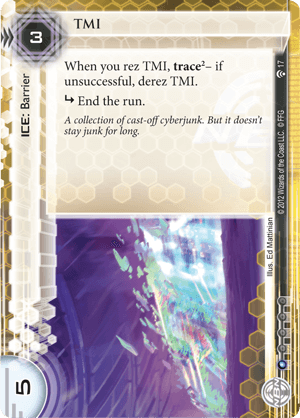 This card is basically terrible. It essentially gives you the option to pay 3 to tax the runner 2. But it really is an opportunity for you to tax yourself for however much you are willing to put towards the trace to keep a 5-str barrier with a single subroutine, a shaper can midrun-install and Anarchs have cutlery; criminals can generate enough from an Account Siphon to make even an expensive break worth it, and 60% of the value of that card is keeping the Corp poor, so it's always worthwhile.

fetish 12
I agree, the base trace strength being lower than the rez cost you pay in advance is just bad. Basically, if you can't ensure you can rez if for 3 creds, it's worse than Wall of Static or Bastion (and even those aren't particularly great ICE). And being able to ensure that you can rez it you need support cards like NBN: Making News, Rutherford Grid or Surveillance Sweep. If you already run those cards for other reasons, TMI might be bearable, but still not a great barrier. If only it had a rez cost of 2, it would still be far less reliable than other ETR Barriers, but it would be way more useful than it is now. — Krams 18 Nov 2015
Just to clarify, if TMI gets De-rezzed, this then means the runner bypasses TMI right? The corp doesn't then just get another chance to re-rez TMI does it? — chris_walker 23 Nov 2015
If TMI derezzes itself, the corp may immediately re-rez it in the same rez window. There are not many reasons to do so, but it is a legal play. — RS14 27 Nov 2015