After some meditation and some deep thinking, I realized what was missing all along. It was in front of me the whole time. 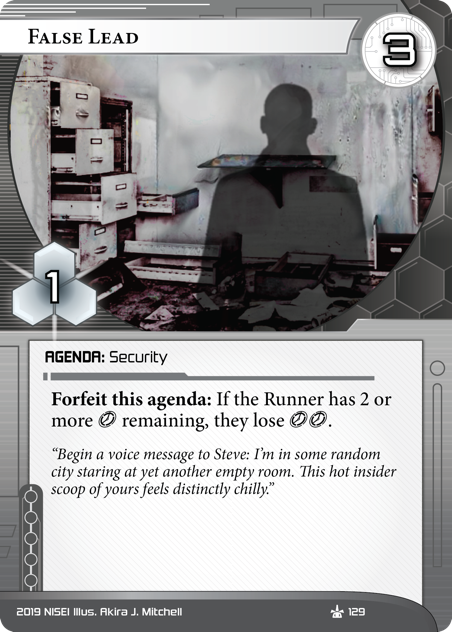 I realized after some time I have a playstyle. I like to have options and I tend to durdle a bit, hoping to force the runner to make an error and capitalize on that mistake. Realistically, that means either ruse cruising them in a classic glacier-type deck or playing whack-a-mole with asset spam, i.e. CtM. In this corp-favored meta, you have to rush. And to make GameNET work, you need to make the runner make runs!

So... I feel bad. AR-Enhanced Security is one of my signature cards. I constantly get flak in the comments for having low asset / trash count card numbers but still having ARES in the deck. I still believe in a heavy ice-destruction meta, it's a great call but when I realized the power of False Lead to land kills easier I decided to lean all-in on it and I haven't even missed it at all.

I decided to slough off EOI and Psychographics for a rushier package. And since we're no longer on the cute CtM agenda suite of ARES, 15 Minutes and GFI, we can focus on something FAR more useful to you in a Yellow kill deck: Bellona.

Bellona is bonkers. Were I a more brave man, I'd be on Mushin No Shin -> Bellona -> NAPD Cordon... but that's another deck for another day. (Y'all can have that one for free.) But I digress.

Bellona is such a useful helpful card, almost ubiquitously so in a taxing deck. So interesting is the safety of Bellona that you can actually IAA with it and park it as though it's an NGO Front. If they go for it, they pay for it and if they don't, whenever you want to you can finish it off and it's credit neutral.

With the extra influence, we were able to jam in a whopping 3x Economic Warfares, 2x of the BOOM!, and my new favorite weyland import into GameNET, 2x Afshar.

Lately (and discussing with my good friend @Radiant), been increasingly feeling poor off Data Raven. A lot of times they just bounce off it and you're merely 4 credits more poor with no facecheck punishment for your opponent. With that in mind, F2P is quickly becoming a favorite of mine in tag hell decks. The facecheck, if unprepared, is fantastically tempo negative for the runner and if they decide they really need to get in, you get reimbursed for half the rez cost via the GameNET ability. This ice really nestles home exceptionally well in both GameNET and CtM.

Digital Rights Management is a fantastic way to put on the gas when you smell a scoring window, and lovely targets can be False Lead, Better Citizen Program, or Bellona!

Much like the way SYNC forces the runner to money up before running, we need to gas this game out as fast as possible because the more they run, the richer you get.

You want to jam out False Leads as fast as you possibly can. Once you start rushing out more, the runner will make runs and make those credits swing right into your deep pockets. False Lead also helps as fantastic insurance if you smell that Apocalypse in their grip.

SEA Source helps even the odds, and the glory turn is the classic SEA -> Closed Accounts -> Hard-Hitting News.

With Rashida and NGO Front (and even DRM), there are plenty of ways to ruse your opponent into making poor decisions. If you're great at reading your opponent, you can do the cheeky DRM to pull something to hand but then IAA an NGO Front. Rage-inducing guaranteed.

This deck has brought me tremendous games, whether murderizing your opponent or just scoring out before they have the tempo to really zoom.

I really feel like this is a much stronger tuned version of the previous TA/OB GameNET and have been really crushing out some great games with this deck.

I consider the following flex slots and possible interchanges!

I know I said you should zoom and Remastered can super help that zoom. I am always tempted by cute ways to force tags onto people, so that's why I jammed this in there. Remastered is probably better, but I think it's really up to personal feel / choice.

I decided on NGO over IPO for two personal reasons: Having to decide to gain 5 credits or go for an HHN is something that plagues me constantly in NBN lately. It also helps with my personal playstyle of baiting runs, but if you feel in your testing / meta that IPO feels better, do it!

My previous revision of this updated deck had MVT front and center as a really good way to pry open scoring windows or punish runs but there's been a wild amount of Apoc / crim around, so I decided to keep HQ safe. If your meta is Apoc-free, I heartily suggest Mumbad Virtual Tour.

This I toil over, but the value of finding an Afshar early as a hard ETR cannot be overstated. This can come down to personal preference really, but I think it also comes down if you can possibly find another good use of two influence.

I love this deck. I think it's come together in a great form.

Get out there and go get 'em, Tiger!