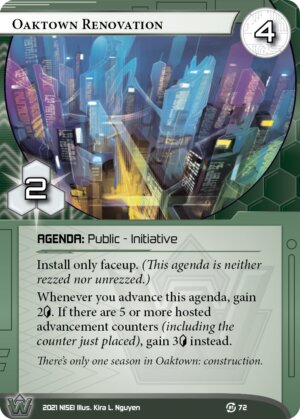 Install only faceup. (This agenda is neither rezzed nor unrezzed.)

Whenever you advance this agenda, gain 2credit. If there are 5 or more hosted advancement counters (including the counter just placed), gain 3credit instead.

There's only one season in Oaktown: construction.
Illustrated by Kira L. Nguyen
Decklists with this card

Players trying to use Oaktown Renovation as a money making device might be missing the most effective part of the ability- that it doesn't cost money to advance. This makes it ideally suited in Weyland rush builds, where agendas must be thrown out as soon as possible. How many times have you played a Weyland rush, where the runner forces you to rez remote ICE, and leaves you just a few credits short of advancing out your agenda? In this case, Oaktown is serving two purposes- funding its own advancement, and generating credits in the bank for the next agenda.

An ideal play would be to Install-Advance-Advance, then the next turn Advance-Advance (score)- Install. Bonus points since that install is blank- is it a 3/2 Project Atlas? or just Jackson Howard, ready to power draw for the agendas you don't have yet? Or a Snare! that you can now afford thanks to the 4 credits gain?

As others have noted, the faceup install is almost a trivial downside, since Weyland rarely utilized advanced traps. A supermoderism deck running Midseason Replacements would be well-poised to capitalize on this information and the lure it provides. More bonus points if you I-A-A the agenda, then it is stolen, since you have actually gained money from the action to spend on your midseason.

I for one am looking forward to trying Supermodernism again with this agenda at the helm.

(The Underway era)
ogrillion 107
"Bonus points since that install is blank" - you install Oaktown faceup, so runner knows what's there, even without advancemnt tokens. — konradh 12 Jul 2015
@konradh, he is suggestion that you IAA Oaktown, then AA (score) install. The new card is not another oaktown, but one of the options he goes on to mention. — vor_lord 12 Jul 2015
This is in fact a fantastic rush agenda. It's very easy to drop it on turn 1 or turn 2 and start advancing, even if your opening hand didn't include Hedge Fund. Just having 3x Oaktown in my deck increases the number of acceptable starting hands I can draw, so it's more rare for me to get screwed by taking a mulligan and drawing an even worse hand on the second attempt. — jiriku 9 Sep 2016
3

This card is so powerful. Simply scoring it as a 4/2 (without over-advancing it) nets you at +4 credits instead of -4. This is a ratio of +8.

Imagine a 4/2 agenda that would read "when you score this agenda, gain 8 credits". Oaktown renovation is even better than that, as you can gradually net these credits in the course of advancing it.

With a PAD Campaign or any other card that gives you 1 credit when your turn begins, it can be scored right after you have been siphoned to 0 credits (if advanced once the turn prior).

As Netrunner is a game of decision making, Oaktown gives you freedom of action. With 3 credits at the beginning of your turn, you no longer have to choose between clicking for credits to play Hedge Fund or advancing down to 0 credits to score your agenda (usually a huge tempo blow).

Advancing it gives you the credits needed to red ICE and/or upgrades that protect it.

Pretty crazy that 6 years later your dream of a 4/2 agenda with "gain 8 credits" is nearly a reality with Offworld Office. I'm glad Netrunner shifted over time to realize how hard anything over 3-advance agendas are to score, and adjusted their effects accordingly.

I'm going to say this straight-up: you do not want to have to score Oaktown Renovation. It's a 4/2 that does nothing to help your board state once you score it.

No, there is a very clear use to Oaktown. You install it faceup behind a big ETR ice like Tollbooth, Hadrian's Wall, or Archer. You advance it twice, making a profit. The runner blows through a Sure Gamble or a Stimhack to pay their way in to steal it.

And then you Midseason them into oblivion. Followed by judicious use of Traffic Accident to burn out Plascretes and IHWs, then Scorched Earth for the kill.

Of course, the runner doesn't want this to happen. Most players are wise to tag 'n bag tricks of SEA Scorch and double Punitive, and have learned that just because they can steal an agenda, doesn't necessarily should. A wise player will let you spend all your time and money scoring that Priority Requisition, and then once they have enough money to beat a trace they will waltz in and steal the next one.

Oaktown doesn't allow that. After you advance it four times, it becomes a Capital Investors, earning you a net 2 credits for every click you spend. If they don't contest this, then they will most assuredly lose the economic race, and will get buried in the tagstorm when they steal their next agenda. And, if they ever start to give it weird looks, or let you score 5 other points, then you can always just move it into your score area at the start of your turn, letting them wonder if you ever even had the Midseason in hand.

Ultimately, any strategy surrounding Oaktown Renovation needs to accept that taunting the runner with a face-up agenda is a good way to get it stolen. The interesting question, then, is what advantage you can gain from such a delicious piece of bait.

(Chrome City era)
tiedyedvortex 4702
"it becomes a Capital Investors, earning you a net 2 credits for every click you spend. If they don't contest this, then they will most assuredly lose the economic race" - for one, modern-day runners can achieve a better click-to-credit ratio (Opus fell out of favor being "too slow"). Also, don't forget that you only have 3 clicks and the runner has 4, so even a straight-up Opus race isn't something that's necessarily in your favor. — PeekaySK 8 Jun 2015
Mopus is slow, that's true; but the slowness comes from the 5 cred to install, and the 2 MU it uses up. That takes time and effort to set up. But Oaktown doesn't require any setup besides the scoring remote that you will already be setting up. — tiedyedvortex 9 Jun 2015
I really have no idea why you say you don't want to score it. People already play Corporate War out of Blue Sun, and Oaktown Renovation is better in basically every way. It nets you an additional credit, gets you the money sooner, and has no strings attached. The face-up install is the only disadvantage, and the majority of Glacier Blue Sun builds aren't trying to do any kind of bluffing. — llama66613 9 Jun 2015
In best case scenario, you have also secured Root in another remote server and you are just printing cash! — konradh 9 Jun 2015
Simeone Diego also helps in this case. — Thaddux 10 Jun 2015
2

After playing the agenda a fair bit i don't know what Weyland ever did without it, Oh yeah run worse 4/2's that's what. It's great click wise it's incredibly efficient install double advance nets you 2 credits, This is like 7 clicks since to end up in the same place you'd have to take 4 credits, install, double advance.

On the down side the runner is 100% sure its an agenda, but your Weyland if you install advance anything they can be a good 90% sure it's an agenda this agenda just doesn't bother hiding the info they can be almost sure of anyway. It can also work into your favor after all you put a sure thing agenda in front of a runner their gonna go for it right maybe even leave them self bankrupt doing it maybe giving you a window for a bigger better to score agenda and make some money along the way.

Just a little tip: you need at least 12 creds to fast advance and score 2/4 agenda with two Biotic Labor. Oaktown let you score it with just 7 in your wallet. Titan Transnational: Investing In Your Future loves it, even if it less secure than NAPD Contract. But at least it isn't affected from Hostile Takeover bad publicity.

I've proxied this to test it out and I'm a little confused about the design. You sort of want to fast advance it so it reaches the money-making threshold quickly, but most of the fast-advance abilities will not trigger its written benefit. Every time I drew it, I would have preferred to see Geothermal Fracking, High-Risk Investment, or even Government Contracts.

I'm sure someone will figure out a way to make this card worth playing, but in my eyes, Weyland has a lot of other comparable agendas that can make it a lot more money with less risk and less investment.

(Chrome City era)
KitsuAeryn 296
It doesn't synergize with SanSan City Grid either. — FarCryFromHuman 8 Jun 2015
It allows for a glacier deck avoiding bad publicity to maintain economic advantage while advancing out it's two pointers, this role was previously filled by Corporate War which could be unreliable at times. — ThndrJudge 8 Jun 2015
It's not straight up economy like Hostile Takeover. It's bait. You install advance, advance and dont lose tempo if it gets stolen. It fits neatly into the last two points for my Blue Sun deck. — LordWei 8 Jun 2015
Combos very well with a scored Utopia Fragment. — Thaddux 10 Jun 2015
Actually it combos off of Trick of Light, but not in the way most players would think of or maybe even use. Advance it over the point that you need to score, collecting credits as you go. Then install another agenda and start Tricking those advancement tokens over. Then go ahead and score both agendas if you so choose at that point. — Calinos 7 Jul 2015