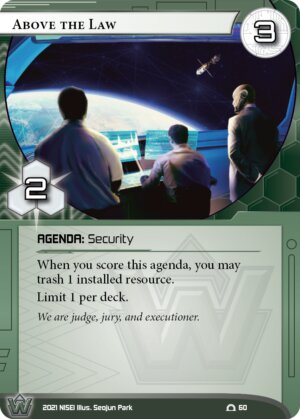 When you score this agenda, you may trash 1 installed resource.

We are judge, jury, and executioner.
Illustrated by Seojun Park
Decklists with this card

Whee, a 3/2 agenda! Let's be honest. This card could be blank, and it would be in many decks, because 3/2 agendas are valuable and easy to score.

Let's talk about Character Assassination for a minute. Since it does nearly the same thing, it's probably a good point of reference. It was never really a popular agenda, partly because it was printed, at a time where it competed for agenda slots with the best agenda in the game. And also Project Beale, which was also no slouch. But even without the competition, Character Assassination was ... not great. (I should know! I tried to make janky decks around it!)

Part of the problem was the meta - This was back when one entire faction had some major incentive to build around the possibility of having to float tags. Which meant, they often avoided playing trashable resources. But the big, underlying problem with Character Assassination is that 4/2s are awkward to score, and there is no guarantee that the runner will have anything that you want to trash.

Above the Law fixes one of those problems - 3/2s are considerably easier to score out than 4/2s. The other problem is still there though - there is not always anything good to blow up when you're ready to score. Sure, sometimes you live the dream and nuke a Professional Contacts or mostly-full Liberated Account or something. But it's equally possible that the best you can do is nuke their Smartware Distributor or something.

Now don't get me wrong - even nuking a 0-cost resource still means that you basically set the runner back by 2 worth of tempo, from the draw and install! That's not bad!

But the fact that it's limit one-per deck means that there are now two strikes against it - you might not even get to draw it, and when you do, there is still a real chance that it might do literally nothing. I think Weyland kind of got the raw end of the stick on this one, when compared to the other corps' unique 3/2s - Luminal Transubstantiation, Longevity Serum, and Tomorrow's Headline are all basically guaranteed to do something useful. None of them can fizzle in the same way as Above the Law. (Arguably Tomorrow's Headline might not be useful if the runner never wants to install a resource again, and you have no tag punishment, but I think it's still a more reliable effect.)

So yeah. That's my review. The effect can be strong, but it's also really inconsistent, and in ways that you, as the corp, don't have complete control over. But whatever else, it's still another 3/2, so if you already have three Project Atlas in your deck, and you want a fourth 3/2, (which is not an unreasonable thing to want) then this is probably your card?

After testing it a bit, I'm pretty confident that the best place for this is a fast advance deck.

For one thing, it's a 3/2. Fast advance decks would gladly play blank 3/2s, because they need something to do their fast-advancing on; normally only 3-advancement agendas can be fast-advanced, and you can only do it a limited number of times in the game, so you want to get as many points from it as you can.

But the effect is a crazily good effect in some gamestates (despite being useless in others). If the Runner drops a Liberated Account with all 16 on it, or if their deck is heavily dependent on some particular resource, or the like, then being able to get rid of it, no questions asked, is a pretty huge swing in your favour. When you're playing a fast advance deck, then you have the power to score a 3/2 at the drop of a hat (assuming you have your combo in hand), and being able to snipe a resource with that is a pretty big deal. It's worth noting that your alternative 3/2s (assuming you're in Weyland because otherwise Above the Law isn't legal, your choice is Project Atlas and Merger) don't do anything when scored as a 3/2, so being able to fast-advance something and get a beneficial side effect is awesome.

Above the Law isn't quite so amazing elsewhere, but it's still fine; the 3/2 statline is rare and valuable for a reason. I've tried it out in rush decks too, and being able to save 1, over the cost of rushing out a 4/2 is nice (although a little minor). It usually ends up sniping something when you score it in the early game, too (maybe not much of something, but you're still slowing the Runner down, and slowing the Runner down without losing tempo yourself is something that rush decks love to do but usually can't). Probably it isn't worth running this over something like Offworld Office, Oaktown Renovation or Cyberdex Sandbox if you're building a pure rush deck, though.

That said, Above the Law can still be pretty viable in rush decks, if you're looking for a different way to close out the game. Rush decks often get stuck on 4 to 6 points, and need to switch strategy. Including Above the Law as a 3/2, along with a cheap fast-advance card like Audacity (in Standard) or Trick of Light (in Startup), will give you the potential to be able to score 2 points out of nowhere, and finish off the game. (Project Atlas is better for this, but you may well be running all three copies of that already, and having redundancy in 3/2s is helpful for this sort of game because a lot of them tend to get stolen.)

It's also worth noting that Above the Law is usable in any sort of Weyland deck as a tech card, against The Turning Wheel in particular. Most Runner decks which run it run only one copy, leave that copy installed pretty much all game (making it easy to score an agenda while it's installed), and have no way to recur it, so scoring an Above the Law can shut off what is usually one of their main win conditions. I've won several games this way. Probably Scapenet is a better tech card against this in the abstract, but Above the Law has the advantage of going in an agenda slot and not costing any influence, so it disrupts your deckbuilding a lot less than a Scapenet would. The Turning Wheel isn't popular at the moment, because the sort of decks that it goes in are bad against the top Corp decks; but if you're playing a Weyland deck that's weak to that sort of effect, you may well consider slotting in Above the Law just to be able to handle it.