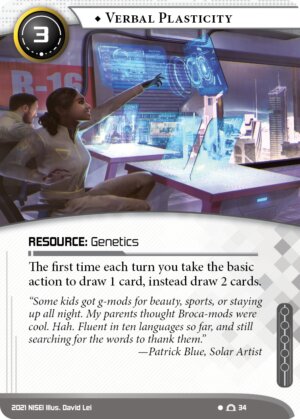 The first time each turn you take the basic action to draw 1 card, instead draw 2 cards.

"Some kids got g-mods for beauty, sports, or staying up all night. My parents thought Broca-mods were cool. Hah. Fluent in ten languages so far, and still searching for the words to thank them."
—Patrick Blue, Solar Artist
Illustrated by David Lei
Decklists with this card

I'm a big fan of Verbal Plasticity, as it represents another influence-free draw option for Runners to think about. But how does it stack up against the competition?

First of all, Plasticity has already been the subject of numerous comparisons, some more useful than others. It's optional Wyldside. It's once-per-turn Laguna Velasco District. It's Symmetrical Visage but draws cards. It's DreamNet but triggers on draw. However, I think the most appropriate comparison is to Earthrise Hotel, the popular neutral draw-engine resource. So, to compare the two:

Earthrise costs a click to draw, a click to install, and four credits. In return, it draws you 6 cards over 3 turns, and then is trashed. This is essentially just turning your credits into cards. If you had clicked for all of these credits, you'd be spending 6 for 6 cards. However, the advantage comes in because it is easier to gain multiple credits for a single click. It's worth noting that every copy of Earthrise in your deck can be played for card draw, but you can only have one in play at a time.

Verbal Plasticity costs a click to draw, a click to install, and three credits, one less than Earthrise. The big differences here are that 1) You only ever need 1 Verbal Plasticity, but the earlier you get it the better 2) You need to invest more clicks post-install, while Earthrise is clickless 3) One Earthrise gives you 6 cards, always. Verbal gives you cards for every turn the game goes on, provided you want to draw.

To compare them directly:

The takeaways here are: Earthrise gives you 3 cards/, but only ever gives you 6 cards. Verbal Plasiticity approaches 2 cards/ the longer it is used, but can theoretically be used for many more cards than Earthrise can ever be. At turn 4 (5 with Verbal) you have met the "+ = cards" point, which Earthrise hit on Turn 3. But at this point, the click investment is much more than what Earthrise has, and clicks are more useful than credits. In my opinion, you want 6 or more out of Verbal Plasticity (turn 5). At 6 uses you essentially have drawn 7 times, then spent a and 3 to draw 5 cards, which is a Quality Time.

I think Verbal has some major disadvantages here. 1) It is only efficient over long timescales. If you aren't playing this in the first turn or two, don't bother. 2) Every turn you choose not to click to draw, you are missing out on efficiency.

The upshot of this is--how often are you drawing? Earthrise is helpful because it can clicklessly draw you through a burst of cards quickly. Most of the time, you don't need to draw through your entire deck, just enough to get your breakers out and economy set up. Earthrise helps with this. Notably, Verbal Plasticity does cost you much fewer credits than Earthrise. If you wanted to draw 12 cards with two Hotels, that costs you 8. But it still only costs you 3 with Verbal Plasticity, just lots of clicks over the course of the game.

For these reasons, I think that Earthrise Hotel is likely the better option for the majority of runners. Maybe event-based Runners who are incredibly draw thirsty for the entirety of the game would make use of Plasticity. Or maybe if Faust was still around, those Runners would want it. But other than that, it is typically too costly to spend a click every turn drawing to get your investment back. In conclusion, my advice would be to run Earthrise, and if you are still lacking draw after all other options are exhausted, then you switch to Verbal Plasticity.

Note: 3 Earthrise is 6 and 12 for 18 cards. To draw 18 cards with Verbal Plasticity, it is 11 and 3. If you expect to consistently need all three Earthrises or more, just run Verbal. But at that point, what kind of deck are you playing?

Really in depth - thank you for this.