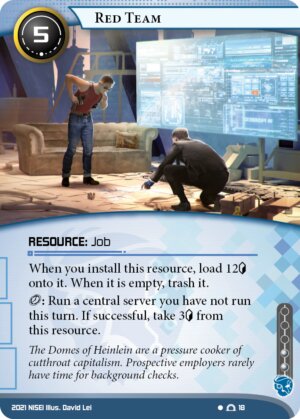 When you install this resource, load 12credit onto it. When it is empty, trash it.

click: Run a central server you have not run this turn. If successful, take 3credit from this resource.

The Domes of Heinlein are a pressure cooker of cutthroat capitalism. Prospective employers rarely have time for background checks.
Illustrated by David Lei
Decklists with this card

Remember Temüjin Contract? That absurd criminal card that went into nearly every runner deck, even with additional influence? Yeah, this is like that, but balanced. Arguably too much so.

Let's start off by comparing the two from a purely economic perspective. Suppose the corp has no ice anywhere, you aren't interested in accesses, you just want dairy dollars.

Temujin Contract: gets you 20 credits for a cost of 4 credits/1 card/6 clicks. net gain: 9

So purely based on that, there is no comparing the two. Temujin is a LOT stronger, but we ofcourse have to keep in mind that it's widely considering an overpowered card. But comparing Red Team to other econ isn't too favorable either. A +1 gain is equal to Easy Mark and worse than Sure Gamble. And that is ignoring the fact that Easy Mark doesn't care about iced servers.

Ofcourse, Red Team isn't a pure econ engine. After the corp has iced centrals, this resource is a nice way to reimburse you after accesses. And there we find its 1 advantage over Temujin. Its effect isn't limited to one chosen central. If you want to have a peek at both HQ and R&D on a turn, Red Team will give you 6 credits for your trouble. Because you spend the clicks on a run you were gonna do anyway, you are effectively increasing your profits! If you also check archives (and then play Apocalypse maybe?) the math gets even better.

None of that takes away from the high upfront cost and slow payout. This is mostly because you can't run the same central more than once per turn. Most corps will ice up HQ turn 1 vs criminal and archives will be a waste of a click in the early game, so that leaves R&D. Unless they ice that too. Also, since you need to use the click ability on Red Team itself, this doesn't combo with run events like Dirty Laundry, Legwork, Bravado or The Maker's Eye. Bummer.

So by itself, this is not a great card. Even if you use it for value runs, it is probably just... fine? Career Fair does make the math a lot more favorable, although criminals aren't exactly lacking for good targets to install with that. Coincedentally (ahum), this is a job resource, so Az installs it for 4 credits.

The biggest consideration when considering this card, is that it adds to that critical mass of "run-econ" some criminals strive for. A run for 3 credits is kind of 'eh', but if you also get to put a credit on Pennyshaver, gain 2 from Security Testing, maybe get some Bankroll or Aumakua value? Now you're cooking!

I do expect to see this card in some aggressive blue lists, but it probably won't be a staple. Definitely not out of faction, like its spiritual predecessor. Which is probably for the best.

I think one thing to remember is that if you were going to run the central anyway, then you aren't clicking for money. You're clicking for runs and getting money from Red Team. So if all of your Red Team runs are ones you were going to make anyway (check un-iced R&D, Archives run for Leech and Aumakua counters, run on HQ with Docklands Pass, etc.) then you are getting 12 credits for 5 credits/1 card/1 click, which is a gain of 5. I think if you are in a position to be patient and use the Red Team without uselessly running Archives, it is a much better investment. The issue is that the 5 install cost does put you behind.

I feel Red Team replace any Dirty Laundry for criminals, unless you are Ken "Express" Tenma: Disappeared Clone. One card giving you the equivalent of 4 Dirty Laundry, sign me up. And it is another target for Career Fair, giving Career Fair more value. All in all, it should be played in most criminal deck, while being seldom splashed in other faction.