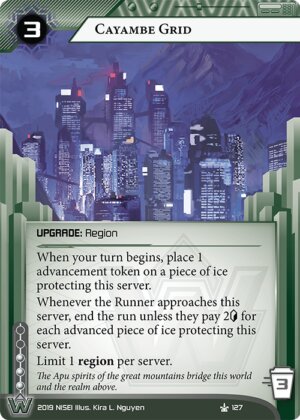 When your turn begins, place 1 advancement token on a piece of ice protecting this server.

Whenever the Runner approaches this server, end the run unless they pay 2credit for each advanced piece of ice protecting this server.

The Apu spirits of the great mountains bridge this world and the realm above.
Illustrated by Kira L. Nguyen
Decklists with this card

Cayambe Grid (most likely named after the Ecuadorean city or volcano Cayambe) is the new defensive upgrade for Weyland. Runners happily rejoice though as this grid doesn’t boost horizontal Weyland decks further.

No, instead Cayambe Grid will be helping glacier decks achieve an alternative strategy to win alongside heavily fortified remotes. The grid goes best in Builder of Nations, SSO Industries, or even an ID like Tennin who look to run ice that already have synergies from advancements. Its first effect can be a double economic whammy – providing economy to Corps through cards like Mass Comm while taxing Runners more to boost strength for applicable ice.

For IDs that already have the capability of advancing their ice, Cayambe Grid’s second effect provides an excellent additional defensive tax that a Corp can spring on a Runner as soon as the encounter with the innermost ice begins. In this way, Cayambe Grid is similar to the defensive ability of Giordano Memorial Field as well as sharing its rez and trash costs. However, it has the additional advantage of being able to control when and how frequently the ability procs. It’s up to the Runner to steal agendas to activate Giordano but a Corp themselves can control when and how many ice they advance giving Cayambe Grid the slight edge over Giordano in my opinion. Looking forward to this card’s eruption in the meta.

(Magnum Opus Reprint era)
BlackCherries 347
One thing missed was that Giordano is NOT a Region so that must be considered while comparing the two. — BlackCherries 6 Sep 2019
You could even run them both in the same server if you have some kind of sadistic jank. They pay through Cayambe on approach, then when they commit to access you can rez Pizza Field, locking them out and wasting alllllll their money. — Dirjel 6 Sep 2019
Pretty sure the card refers to Volcan Cayambe in New Angeles, where The Root is located. — HolyMackerel 8 Sep 2019
Nice callout, thank you! — BlackCherries 13 Sep 2019

>Cayambe Grid having a slight edge over Giordano is a vast understatement in my opinion. Giordano can prevent the runner from getting in but Cayambe also helps you in building your scoring server.

This is an exeptional powerful card, that will define Weyland meta for some time.

BlackCherries Review mentions some of the key points already, so i will add three additional synergies:

1) Wall-to-wall combined with this card can create a very powerful server. Getting two advancement tokens per turn is no joke and at the time of the Uprising release there are many excellent targets in Masvingo, Ice wall, Colossus, Hortum, etc. Combine this with the added cost of the newly released Earth Station ID for running your external server and you will make the runner think very hard about that run.

2) Building on the first point: Charge up your Oduduwa before the runner encounters it for the first time and watch the runners brain explode as you put a boatload of advancement tokens on another ICE. And it even ends the run! If you are running an advancable ICE package anyway you will have no trouble finding targets. I have encountered a colossus with double digit advancement tokens in our meta already.

3) Border Control. This one just hurts my soul... From my understanding you can end the run with Border Control even after the Runner has paid the Cayambe Grid Fee, making them run the server again, MAKING THEM PAY FOR CAYAMBE GRID AGAIN! (Bonus points for another Oduduwa encounter)

So all in all i think this grid supports the new Weyland ID really well and will strangely probably lead to more advancable ICE being played, something FFG has tried very hard to accomplish in the past. See you on the MWL!