"The Konjin dons the mask of our fears, but what lies underneath?"
-Lat
Jinteki • Krembler • Uprising 109
All sets:
Links: Decklists | ANCUR 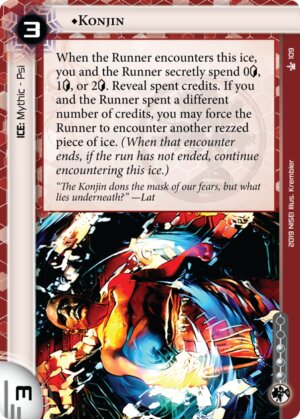 There are some pretty scary ways runners can beat Konjin, though. Hunting Grounds blanks it once per turn, and Hippo can trivially trash it (breaking no subroutines means you broke all of them). I doubt Konjin will be the centrepiece of any ice suite anyway - that's more likely to be the expensive ice you're copying with it - but its worth considering its placement carefully to avoid stuff like Hippo.

Finally, Konjin makes possible a three server Mythic ice combo with Mother Goddess and Loki. With exactly these three ice rezzed, you can have two servers be impenetrable to traditional (Fracter, Decoder, Killer) breakers, and a third server secure 2/3rds of the time. Thankfully Mom is rotated now so we won't see this in Standard, and I'm not convinced its reliable enough to stand up to the crazy kinds of things runners can do in Eternal.

also murders Kit in the face. She burns her encounter on Konjin, then has to encounter something scary without her ID ability :O