The first time each turn you install a card in this server, gain 2credit or draw 1 card. 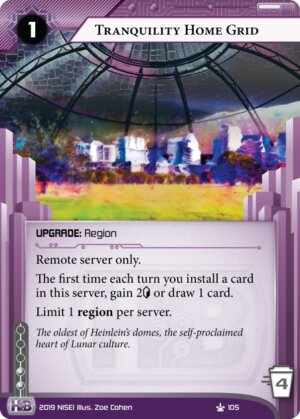 I think it's an asset spam or rush / jammy card. Rez for 1 is always good with a trash cost of 4. And it gives you 2 credits or a card the first install each turn. So you want to use it to install cards often on this and in a jammy list it means you are not losing tempo while jamming stuff.
IAA usually costs you 3 clicks & 2 credits, with this it "only" costs you 3 clicks.

Installing & firing Rashida Jaheem means 3 cards & 5 credits, what's not to like? But it also means you need some ice to protect this card. Advanced Assembly Lines can give you the bonus twice, once in your & once in your opponents turn.
It might make sense with costly assets you only use once and don't keep in the server, like Bass CH1R180G4. And then we are fast in comparing it to Breaker Bay Grid which rezzes for free (until 5), so in the territory of 0 - 1 this is better (or multiple installs) from 3 - 5 BB is better. In combo decks like Spombo Asa also BB is the better choice, as you can use it for multiple items a turn.

So what are cards you want to throw in the server?

But also cards that are useless otherwise can go in the remote and force runner actions like CVS while giving you credits or cards.

The draw can be something that is better as this is also something BB does not offer.

The trash costs of 4 is a huge thing, so usually when I see it as a player I can't afford (in terms of tempo) to trash it.