When you rez this ice, take 1 bad publicity.

subroutine Trace [6]– If successful, the Runner cannot steal or trash Corp cards for the remainder of the run. 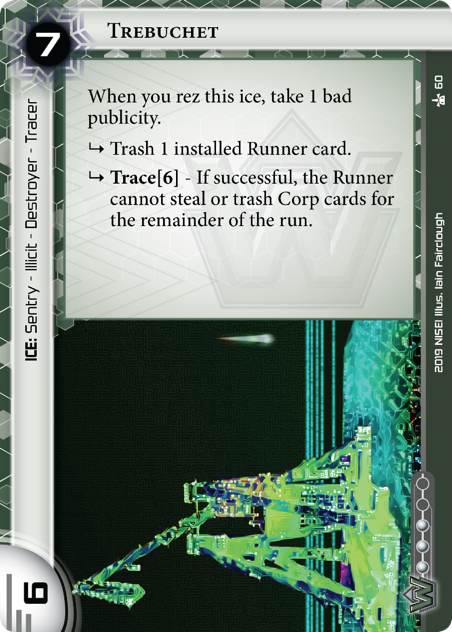 I like this ice because it's an illicit ice that hurts and stays in play pretty well. Having a 6 strength is something not trivial to pass through and the trace 6 is also something that you can't just avoid even with powertaps and nexus.

Nowadays there are ways to get off that badpub easily such us Roughneck Repair Squad or Increased Drop Rates so it's not a hard downside and also The Outfit: Family Owned and Operated can profit from it.

I guess that it doesn't see much competitive play right now because it's expensive and people, want faster cards than melange mining co v 2.0 to get cash, but it could work.

(Uprising Booster Pack era)
valerian32 64
I really like how flavorful this card is, too! The trace ability lets the Runner access to get info (or hit an ambush) but they can't do anything about what they access. Also it doesn't stop successful run effects like Diversion of Funds, Stargate, or Apocalypse, which is thematic for a trebuchet that is defenseless at close range. Maybe that's why it isn't played as much. — dnddmdb 25 Nov 2019
0

7 to rez, 6 strength Sentry that trashes a Card + make access hard to do, sounds good. It feels like the big brother of Grim, which only trashes a Program and is rotated. This can also be used to trash a console (und hopefully more), or an important Ressource.
The downside is the bad pub, which makes each Run cheaper so the trade off is hard to justify. When the effect needs to be strong enough to justify it's downside. And compare to Archer it is not ending the run. But it's costs are kind of comparable as for Archer you usually need to score a Hostile Takeover and they are both on Strength 6 but Archer is harder to break with it's 4 subs. On the other hand, you can rez it early without a scored agenda and this is the time when this card is very powerful. Also to score the first agenda in Weyland is mainly easy, this might help you to score the second.

To me it reads that with Film Critic you can go through this (if the Critic survives) and put the Agenda on the Critic.

This card can't be reviewed without taking The Outfit: Family Owned and Operated into account. As it means you are getting 3 credits back and for 4 to rez, it seems like a very decent ICE! And usually it effects early game are worth the rez. The biggest question in Outfit, how many bad pub is still ok?

I can see this card for sure in Outfit or other decks that try to rush hard, like Argus Security: Protection Guaranteed otherwise the price and the down side are to strong. Only in Outfit it feels good enough for my taste, but maybe there is a build that can capitalize on it? Often in Argus when a Hostile is scored you need to be careful because of Archer, perhaps a build with Trebuchet can hit you unexpected?