Play only if the Runner stole an agenda during their last turn.

Choose a Runner card type. Trash all installed non-icebreaker cards of that type. The Runner may prevent any of those cards from being trashed by paying 3credit each. Take 1 bad publicity.

It is pitch black. You are likely to be eaten by a Troll.
NBN • Krembler • Downfall 53
All sets:
Links: Decklists | ANCUR 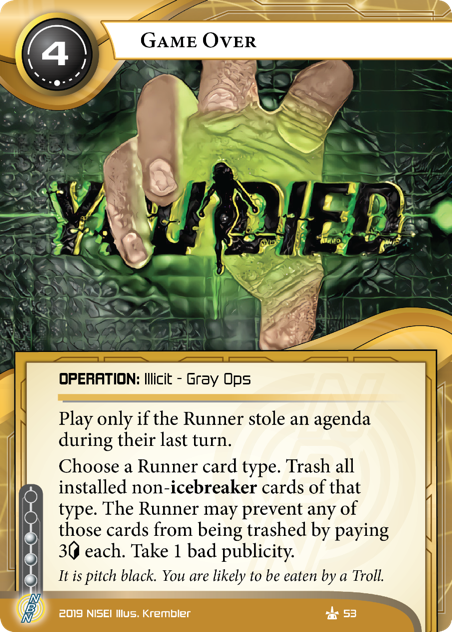 This is one of these big powerplay cards I like but never play in anything other than the jankiest of decks.

In theory this card can be an absolute powerhouse, but there are just a ton of factors to consider. 4 credits is nothing to sneeze at, the runner must have just stolen an agenda and you need several juicy targets to make it worth the effect. It doesn't hit ice breakers, so unless your opponent is a shaper, it won't give you a ton of value. Hardware also seems like an edge case. Against runners with tons of resources like Sunny this card can shine. But the runner still has a choice about which cards they want to save for 3 credits per piece and what they can miss. Furthermore, the omnipresent Film Critic counters this card, it gives you a bad pub and if you are in the late game, when this card would be strongest, the runner might just be rich enough to not care about its effect. Let's not forget that at 3 influence it isn't easy to splash either.

So yeah, I am sure someone will have pulled this card off to great effect. But if I want to cause some destruction on the runner's board, I would probably play a tag card and The All-Seeing I.

(Uprising Booster Pack era)
Cpt_nice 812
It kind of compares to Biased Reporting, which also doesn't see too much play and is roughly the same power level. I suppose that given both cards are heavily dependent on their opponent's decisions, they aren't reliable cards. — BlackCherries 11 Sep 2019