subroutineEnd the run unless the Runner pays 2credit.

subroutineReveal the top 3 cards of the stack. Add 1 of those cards to the grip and gain credits equal to its install or play cost. The Runner shuffles the stack. Trash this ice.

Though many countries attempted to regulate digital loot boxes in the early 21st century, GameNET has managed to circumvent any such laws via explicit, transparent percentage rates... and some very determined lobbyists.
NBN • Krembler • Downfall 51
All sets:
Links: Decklists | ANCUR 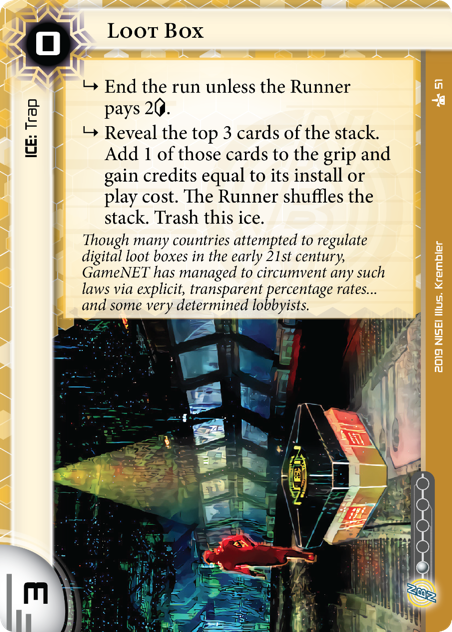 Well. It's happened. Netrunner has added Lootboxes. Time to ragequit like everyone else does when Lootboxes are added to a game.

Seriously though, this card looks pretty sweet. As a trap, it forces the Runner to pay credits to keep running, and gives ME credits (though I do have to make the tough choice of giving them a good card for those credits). Probably the best choice will be something that is a situational card that doesn't really hurt me in this matchup, but it will probably still be a tough choice. Loving it.