When the Runner passes this ice, gain 1credit.

You are the ONE BILLIONTH visitor!
NBN • Akira J. Mitchell • Downfall 50
All sets:
Links: Decklists | ANCUR 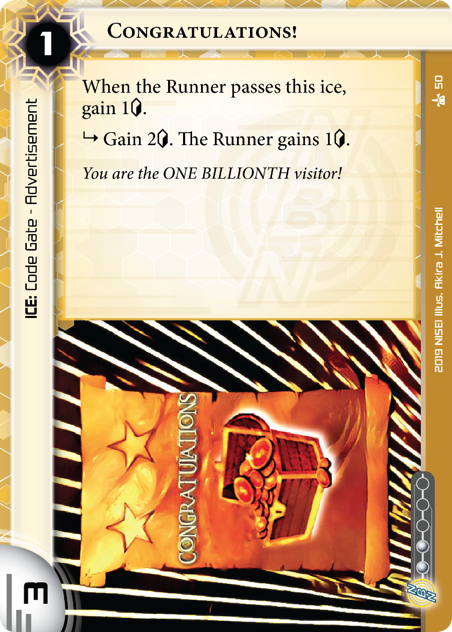 The obvious comparison for this is Pop-up Window.

They’re both cheap, mildly annoying NBN Code Gates. Being Advertisements, they both gain extra value out of Spark. So which to include?

So far I’ve yet to see it take over Pop-up as the de facto cheap/annoying NBN ICE. I think they’re pretty evenly matched power-wise but I think the fact that it gifts the runner creds and doesn’t tax if they let it fire are keeping it from seeing play. Out of Spark, it might be worth including a couple of both, but otherwise I think Pop-up still wins out.

Regardless, it’s a well designed Nisei card that boosts a fairly fringe ID. It‘s great to see them releasing cards that have the potential to make underused IDs more viable.

(Downfall era)
ptc 74
While it makes sense to compare this to Pop-up Window being cheap ad NBN ice, I think the more appropriate comparison is to Slot Machine. Despite Slot Machine costing slightly extra to rez, its swing is almost always better than Congratulations. You're only going to be playing this ice for its subtype in Spark. — BlackCherries 29 May 2019
That’s fair, though I’m not sure the two ICE would be necessarily competing for the same slot. SM is taxing while this generates income. I’ve seen people suggest that it might work out a deck like PE that doesn’t care too much about the runner having money, though I’m not sure it’d be worth the 2 inf a pop. — ptc 29 May 2019
Overall I agree. If you're not using it for its subtype, it's still just a net 2 credit swing (+3 for you +1 for the Runner compared to Popup: +1 for you -1 for the Runner) with the difference being that Popup takes away from the Runner whereas Congratulations! doesn't. I've heard it said before, that in a world of infinite money, the runner always wins because your ICE and assets then don't really exist. You probably don't want to stack this in a heavily ICEd very high either, considering its monitory gain would be offset by the increased ICE cost. That being said--perhaps Congratulations! Perhaps this is more of an early asset protection card? Maybe a, "Sure, you might trash my Marilyn campaign, but you just paid me 3 credits to shuffle it back into R&D" kind of thing. — Chezni 29 May 2019
It seems likely that there will be an ad-based NBN ID in the next Nisei pack. I think that despite the subtype this is a huge nombo in Spark. Spark wants the runner broke and miserable. It doesn't want to be playing anything that says 'give the runner money'. — Greasythumb 29 Jul 2019