While you are resolving this event, each player's identity loses all abilities.

Run any server. When that run ends, you may shuffle this event into your stack.

Get into the ducts on the roof and keep crawling till you hit that old network root. Dirty work, I know, but it beats playing by the rules.
Neutral • Olie Boldador • Downfall 28
All sets:
Links: Decklists | ANCUR 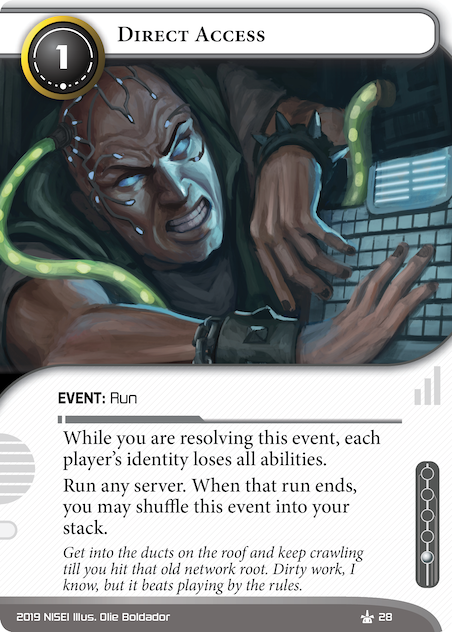 As of writing, there are 41 legal Corp Identities in Standard. Out of those, Direct Access does literally nothing to 14 of them. Among the remaining 27, about 10 are effectively blank; either you only save a credit (or no credits by using Direct Access) or you prevent the Corp from maybe gaining a credit, or the effect would only be applicable in extreme edge cases.

I think the remaining 17 Corp Identities can be separated into three groups based on how useful Direct Access might be against them:

My thoughts: Direct Access is a far more balanced and well-designed version of Employee Strike. It does not smother Corps as unilaterally, but can really shine in particular matchups. I think if you slot it, you will use it to surprising effect in some games. However, whether or not it is worth a slot is dependent on the state of the meta, as well as what Runner ID you’re using because oh yeah, it blanks yours too.

ADDENDUM: This ID is slightly better against Argus, Personal Evolution, and Sportsmetal than I originally stated if you have multi-access such as The Turning Wheel (or against Mwanza PE), since these Identities trigger every time you steal an agenda. Avoiding 3 net damage, 3 tags, or denying 6 credits to the corp during a deep R&D dig is very good value, although this is a niche occurrence.

(Uprising Booster Pack era)
dnddmdb 66
Nice list. You really want to highlight what makes it so unique - its ability to shuffle back into your stack for repeated usage. It may be an Event but it can see multiple uses during a game. — BlackCherries 14 Sep 2019
Yeah, I realized after writing all this that there's a whole other side of the card to go into; how it shuffles back into the stack. For example, playing as RP against this might be a nightmare. As the game goes on, it just gets easier and easier for the Runner to get into your remotes as the stack thins out. Lots of little nuances that come up on the Runner side of things that are worth thinking about. :) But I think for now the bigger question is: should you play the card? — dnddmdb 14 Sep 2019
Could be decent in a deck that wants to run through itself quickly. — LynxMegaCorp 21 Sep 2019
0

This card appears to be overpowered.

Turning off the runner ability is not going to bother most runners.

Turning off the corp ability will enable safer accesses and agenda steals.

This is another 3+ copies of Employee Strike without being on the MWL.

Maybe this is a knee jerk reaction, but I think this card should not exist.

(System Core 2019 era)
lunchmoney 259
This hammers a few Corps very hard: Mti, AgInfusion, maybe even Argus. But to others, this is waaaaay different than EStrike. — BlackCherries 12 Mar 2019
"2019 MWL: Announced 22 April 2019, Effective 3 May 2019" it's hurts mostly op corps, and it's perhaps with ES and Film Critic removal on next MWL in mind. — LeePo 12 Mar 2019
FC for Whistleblower — LeePo 12 Mar 2019
Not really. NO, absolutely not. If you are running Mti or AgInfusion, just use their ability after Direct Access run. Just block them with border, batty, nisei, etc. than use your ability as nothing happened. — Two_EG 12 Mar 2019
This card gives you E Strike for 1 run in exchange for: — branimated 13 Mar 2019
>_< Anyway, this card blanks the Corp's ID for one run and cannot be combined with other events (such as Stimhack, Maker's Eye, Diversion, etc). It's a very tame implementation of E Strike, and I think it'll be hard to slot them. — branimated 13 Mar 2019
Good to see this sparked a little conversation. I'm still not convinced. I shall see once I start playing with it. — lunchmoney 13 Mar 2019
Does this event remove the Runner's link? It's very odd that it uses the strange wording 'loses all abilities'; how does that differ from the standard 'identity text box is blank'? — Theyos 13 Mar 2019
We'll have to wait until the update to the NISEI Rules Document is released to find out. That should be next week. — BlackCherries 13 Mar 2019
This hurts Haarpischord Studios a lot. :( — kevnburg 19 Mar 2019
Now that MWL 3.2 has thankfully axed ES, this card is the best answer to corp IDs that punish you for running. It'll be interesting to see how much play this'll see now. Even though Mti has also been shown the door, there are still plenty of IDs which are hurt by this card and its self-recursion means slotting just one or two should be enough. The inf cost is a pain though. ES also cost an inf but was much stronger so it'll be harder to justify using one up to slot this. — ptc 5 May 2019