Always Have a Backup Plan

Run any server. When that run ends, if it was unsuccessful, you may run that server again, ignoring any additional costs to run. During the second run, when you encounter the last ice you encountered in the first run, bypass it.

"Everyone told me she was reliable in a pinch."
-Az McCaffrey
Criminal • Olie Boldador • Downfall 11
All sets:
Links: Decklists | ANCUR 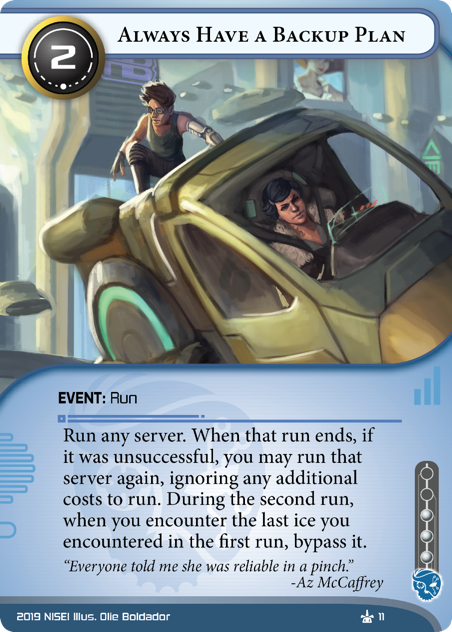 When I first looked at this card, I thought to myself "wow, this looks like a worse version of Inside Job or Spear Phishing". But then I thought about it a bit harder and realized that this card actually takes care of the one annoying case spear phishing and inside job fail at: what if the big ice is in the middle of the server?

Quite often, when playing against criminal, the Corp will sandwich their big ice between two lower cost ice to ensure the big ice is not bypassed by the spear phishing/inside job suite. But that's where this card comes in. You can pay through the first ice, hit an "end the run" subroutine of that middle ice, and use the second run from this card to bypass that big annoying ice and move on to the tiny innermost ice.

Since jacking out is considered an unsuccessful run, this card has great synergy with Flip Switch. If you see a scary sentry or any other big ice whose "end the run" subroutine is non-existent or after scary subroutines, you can use flip switch to jack out while encountering the scary ice (assuming the ice does not have a scary "when encountered" effect) and then bypass that ice during the second run part of this card

A bit of a jank but interesting effect: if there is a semi annoying 2+ strength ice in the outer side of the server which you can go through without the aid of this card, you can use this card in conjunction with Chisel to lower the strength of that ice by two within a single click, making it much softer and easier to destroy. Similarly, this card can create a lot of problems for Sandstone due to this exact reasoning

This is my first ever card review. Please let me know if there is a way I can improve myself. I would like to write reviews for more downfall cards from a system core perspective, but would like people's go ahead before I continue to do so.