When you score Project Atlas, place 1 agenda counter on it for each advancement token on it over 3.

Hosted agenda counter: Search R&D for 1 card, reveal it, and add it to HQ. Shuffle R&D. 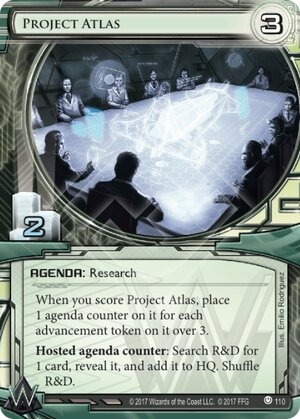 Leading with the lore, it's possible that this card is in reference to SM-65 Atlas, which was the American response to the Soviet R-7 Semyorka. It was a long range ICBM (intercontinental ballistic missile) that attempted to match Russia's intercontinental capabilities; in effect it put the entire Earth at risk of nuclear apocalypse. Given Weyland's American theming (see: Wendigo, Ireress, Student Loans, space ice, etc.) it's quite possible Atlas is in reference to this.

In terms of game mechanics, Atlas might be Weyland's most powerful agenda at the time of this post. It's the faction's only 3/2, similar to AstroScript Pilot Program and Project Vitruvius, and has an extremely potent ability to boot. Putting three Snare! into a deck and having one Atlas token scored grants the corporation unfathomed reach in penalizing the runner for their mistake. This interaction was encapsulated in the tournament-style Supermodernism, which has seen revitalization due to Titan Transnational: Investing In Your Future ability to score an Atlas with a free counter.

It's also quite possible to use Atlas as an empty threat, a "vegan" Weyland, without meat damage. When the corp is in a strong position (I like Akitaro Watanabe and Chimera personally) it's possible to chain together Project Atlas by summoning a new agenda with each token. With enough funds (what is Weyland without lodsemoney? youtu.be) the corporation can surge to 6 points in the blink of an eye; one Hostile Takeover is all it takes to win the game after that point.

(The Universe of Tomorrow era)
pbrand 264
I think Oaktown Renovation could give it a run for it's money (double pun intended). I also think SanSan City Grid deserves special mention here, since with Titan Transnational, it allows you to effectively win the game in 3 turns by scoring Atlas's from hand and chain-tutoring them (often referred to as "The Atlas Train". — Bigguyforyou518 10 Oct 2015
Project atlas refers to plans for a new dropship, which brings to mind Atlas from Greek myth who held the Earth on his shoulders. I think Oaktown and Atlas are both tied for best Weyland Agenda. Atlas allows you to maintain a Sea Scorch Scorch threat once you have a counter on it, and that should be respected by the runner. — Kasusfactus 10 Oct 2015
Ah, was the dropship mentioned in the expansion liner notes, or was it from the other properties (board game, books, etc.)? — pbrand 11 Oct 2015
It was a Lukas Tweet https://twitter.com/rukasufox/status/598947674205753344 — Executive Theta 11 Oct 2015
Project Atlas is most likely a direct reference to the mythological figure, Atlas, who held the heavens on his shoulders - see beanstalk - and/or to the Ayn Rand novel Atlas Shrugged which features Jack Weyland's literary antecedent Henry Rearden. — striatic 13 Oct 2015