X is equal to or less than the number of tags the Runner has.

Place X advancement tokens on a card that can be advanced.

Access to the largest consumer database in the galaxy has its advantages.
NBN • Kate Laird • System Core 2019 118
All sets:
Links: Decklists | ANCUR 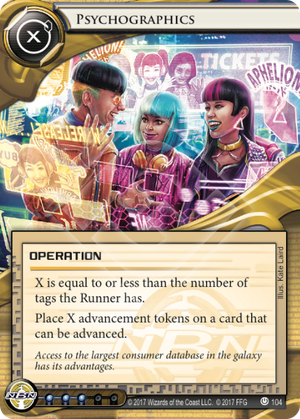 As the popularity of Tagstorm style decks starts to become more prevalent, Psychographics will see more use. The card is an interesting fast advance tool, allowing any agenda, no matter how many points it requires to score (Government Takeover for instance, or an instant win over advanced Project Beale) to be scored in a single turn.

It requires money, but so does any of the fast advance tricks. It also requires the runner to have several tags, and not be clearing them. It can be used to great effect with Midseason Replacements, which is the most common combo to play Psychographics with.

An interesting development comes with the release of Clot. Because using such a card would be on the corp turn, the paid ability window (including the time to score) would be in the corp favor. That would allow Psychographics to score out even a Three for Two (such as Astroscript) without the chance for clot to be used after the agenda is advanced. The runner would have to install clot (with a paid ability) when the card was installed, which is risky and can be bluffed out easily. Psychographics can be made to work with that and may see more use in a post Clot meta.

While it has not had a lot of effect outside of score big agendas (Government Takeover, over advanced Project Beale, or Mandatory Upgrades) it could very much see use to combat Clot.