The Runner can spend click to break any subroutine on Ichi 1.0.

subroutine Trace [1]– If successful, give the Runner 1 tag and do 1 brain damage.

My reputation would precede me, if any could speak of it.
Haas-Bioroid • Andreas Zafiratos • System Core 2019 75
All sets:
Links: Decklists | ANCUR 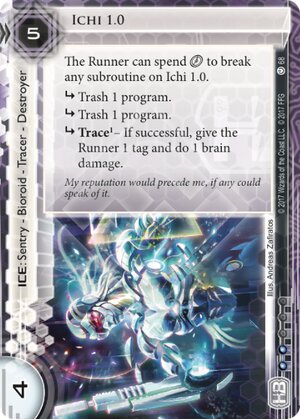 Ichi is another of the Bioroid ICE that has had its appearance but never really the spotlight. Ichi is often regarded as a great piece of surprise ICE, and like all the three subroutine ICE, considered rather taxing. It is also very well costed for its strength, like all Bioroids. This is, of course, due to their click through drawback.

Ichi’s third subroutine is often what new Netrunners might really want to try to work. Brain damage is so very intriguing, but there has yet to be a way to land enough of it with success to finish off the runner. It makes landing meat or net damage easier, which is probably what the tag is there for as well - a single brain damage and a tag as the runner’s turn ends is a prime position for a Scorched Earth to follow up on, making Ichi a good splash into Weyland. That isn’t quite enough to kill them, but there are a plethora of other cards for damage now, and saving the click to get the tag might be all you need.

Ichi’s trash program subroutines are probably the more devastating however. Two programs on one piece of ICE is a hefty cost, and if hit with only a single click left (as most runners tend to run on their third click) it can still cost them something. Assuming of course, a relevant icebreaker isn’t already installed.

Ichi continues to be useful for what he does, and is often a good, cheap (ish), program destruction for Haas Bioroid. While he hasn’t made that much of a splash, he still has places to go.

(Breaker Bay era)
lynkfox 357
I think you've undersold Ichi 1.0's tax cost. A 4 cost sentry with 3 subs you frequently don't want to fire is extremely taxing for a runner to deal with. As long as you have some actual 'End the Run' ice out so they can't just run through Ichi without any programs out, he is very expensive to deal with repeatedly. — Ber 27 Apr 2015
Well said! I did not take into account that outside of Faerie or Sharpshooter (which have their own cost as well) Ichi takes at least 4 credits for any breaker to break, generally more than that. That is of course mitigated by a few spare clicks to reduce the cost, but that is its own cost as well of course. It can be very taxing, and that should be regarded well. — lynkfox 27 Apr 2015
Worth mentioning that his 3rd subroutine can often just be paid off by the runner if he's on good econ footing and wants to save a click. A 1-strength trace is weak as hell, and after spending 5 to rez him, you may not be in any position to buff it up. If it's a runner with link, they may walk right through that for free. — Bigguyforyou518 27 Apr 2015
Generally, once you've pumped your breaker to strength 4, spending the 1 credit to break each is going to be far better than spending a click, unless you just don't have the money. Even vs Mimic + Datasucker, you're going to tax 3 + a token. Ichi is one of those Ice that I'm not sure why it isn't more popular. — Wookiee 4 May 2015
Its not more popular because it has a glaring weakness in the earlygame, if the runner has no programs out and just a little link strength (one point breaks even) they can run through Ichi 1.0 and not suffer any ill effect. So early in the game you wont have the creds you need to beat him in a trace after ressing a 5-cost ice. — tsuruki23 20 May 2015