When you score Project Vitruvius, place 1 agenda counter on it for each advancement token on it over 3. 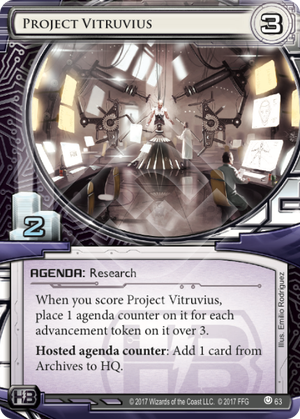 Vitruvius is seen often in HB decks, but not usually for the printed ability. Mostly because it is another three for two, which works well around the Biotic Labor or SanSan City Grid fast advance strategies. Its printed ability is very nice however - given that any non fast advance scoring of this card will leave it on the table at least one runner turn, as long as it is not being ‘never advanced’ it can be scored with two counters.

The retrieval ability is strong, very strong - it can be used for any reason, during any paid ability window. Padding up HQ during a Legwork run, retrieving lost combo pieces, or simply recurring various economic or strategic assets and upgrades to keep the servers safe. Even recurring the same damage card three times in one turn, reducing the number of cards needing to be held in hand for a flatline.

While Vitruvius was strong and used often for its ability to be easily fast advanced, as that strategy becomes slightly less common it is ready to find life for its counter ability rather than just its advancement cost.