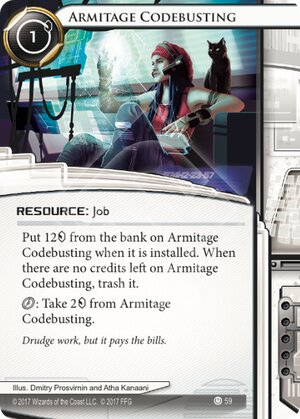 Armitage might require a re-examination in the post-Revised Core/Boggsian MWL world. Decks that benefit from Magnum Opus, but need a different Restricted card for its strategy will likely resort to the old Core 1.0 standby for their econ.

One of the earliest ways that money was generated for the runner, Armitage has fallen a bit out of use. With the likes of Daily Casts providing a similar amount for no spent click, and other economic options flowing into the game, it is just another option. However, consider the fact that it can generate credits much to the same ratio as Magnum Opus, without the hefty install cost or the MU. (For a limited time of course)

Armitage can allow an almost broke runner to be back in range for Sure Gamble the next turn, or enough to break into a lightly defended server. While it doesn’t stick around like Magnum, its well known that the ability to ‘Take eight’ that Magnum provides can be vicious. That is a solid amount of burst, even at the cost of a full turn, and Armitage can provide that without the drawbacks that Magnum can, if for a much shorter burst. If the runner is taged and can't shake them, playing armitage and clicking it 3 times, while vastly uneffecient in terms of a full turn, can still net five credits, which might be just what is needed to shake the tags next turn or make one more glory run. It deserves to be looked at again for economy options where the runner doesn’t want to put a lot of event economy into their deck, or would like something a bit more flexible but not as difficult to install as Magnum

(Breaker Bay era)
lynkfox 358
People consistently give Armitage a bad rap, simply due to more modern options. The thing is - this is one of those cards I always consider for a runner deck, when running Opus. The difference is in card slots, of course - but in a deck where Opus would be good econ, Armitage may be better. How often do you use Opus? Did losing the four creds difference in price mess up your setup? Is 2MU a significant cost? Consider that three Armitage are never dead draws in a deck (like three Opus), and that tutoring an opus requires card slots, and this card still has a great deal of life in it, for the right decks. — Shannon.L 29 May 2015
Remember too that MOpus only breaks even with this after EIGHT clicks, and beats it after nine. This is because it costs 4 more creds. Plus depending on how much MU is worth to you...yeah, if you're not in it for the long haul Armitage is generally going to be superior. — LordRandomness 16 Jan 2016
I forgot I ever used this card. It's so unnotable. — NoSoup4you 29 Nov 2016