Derez a piece of ice. 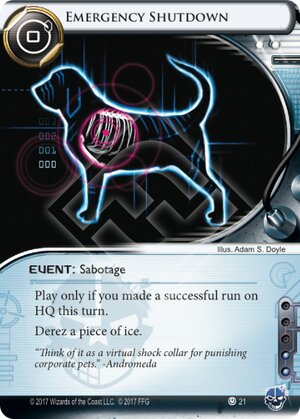 A card that works well with many criminal directions, and a card that helps illustrate the strategy criminal’s sometimes follow: A successful criminal doesn’t need breakers. Emergency shutdown can be a brutal economic hit to a corp, especially when following Account Siphon. In combination with a lot of the other HQ focused cards that Criminal possess, it is not hard to make use of it.

It is always going to cost the corp something when this card is used, but the problem may become that it may only cost a few credits. Some corp archetypes have very cheap ICE and that is possibly why Emergency Shutdown hasn’t seen a solid spotlight. Not that it hasn’t been seen - It certainly works well, especially with ICE like Tollbooth being extremely popular.

I really want to like this card. It has the potential to be a huge economic swing. It's possible to turn off a Tollbooth or something that costs even more with this. It's possible to use it in combination with something like Inside Job or Feint to get in once and then get back in again later when they can't re-rez because they don't have the money.

It must be admitted, though, that this is a win-more card. It sucks when you can't get in already. You will have a hard time in any come back from behind situation when using this card. If you draw it in a situation where you are already behind the curve, it could possibly leave you worse off since literally any other card in your deck would be better.

On the other hand, if you are already dominating and they rez some 8 coster hoping to stabilize, then you can just shut it down for 0 and be even farther ahead.

Cards like that tend to be bad usages of deck space. You want to be using cards that are good regardless of the game state. Sure Gamble is pretty good if you are ahead or behind, for instance. That makes Sure Gamble a better card than this.

It should also be pointed out that many times you want to use this, you might be forced into using something else instead. That possibility really hurts this card. If you use Same Old Thing to pull out an Account Siphon at the start of the turn, you will likely end with 2 tags and 2 clicks. Do you use Emergency Shutdown? If you do, you might get hit with Scorched Earth and lose. Maybe it's safer to just clear the tags and miss your golden opportunity to turn off that Curtain Wall. Just another thing that makes it that much harder for this card to shine.

Ultimately, the deck is stacked against this card being dominant. Cards like Sneakdoor Beta can really help it, but there is something to be said for having to devote credits, clicks, and such to get rid of the downsides of a card that's already not the best thing since sliced bread in some large percentage of game states.

(Quorum era)
Raiddinn 34
Calling this a win-more card seems a bit short-sighted. Certainly if you're rich and they're poor, or vice versa, it's less useful. But if your'e fighting an even financial battle with the corp, and land a shutdown on a large ice, that's quite a swing. — MrAaronSA 10 Feb 2017
Someone who's installing Sneakdoor Beta isn't doing it JUST for Emergency Shutdown. — LynxMegaCorp 11 Feb 2017
https://stimhack.com/why-win-more-is-not-a-problem-in-netrunner/ — Pink 1 Nov 2017