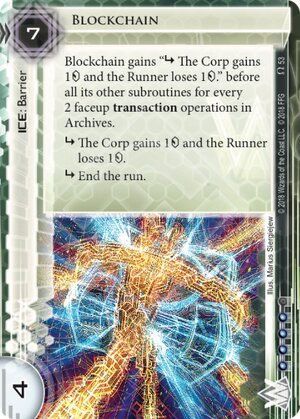 Blockchain gains "subroutine The Corp gains 1credit and the Runner loses 1credit." before all its other subroutines for every 2 faceup transaction operations in Archives.

subroutine The Corp gains 1credit and the Runner loses 1credit.

Illustrated by Marius Siergiejew
Decklists with this card

On the surface, this ice is just another barrier that becomes near unplayable by the existence of Paperclip. 7 to rez, 3 to break, is just pathetic. However, this card's strength is in its late game potential. There are a ton of transactions, and many of them are widely played and powerful. Hedge Fund, IPO, Green Level Clearance, Ultraviolet Clearance.... They all contribute to making Blockchain a potential monster. If you have 6 transactions in archives, this card will have 5 subroutines. At 10, you go up 7, and this card becomes more expensive to break than Endless EULA. If only there was an ID that wanted to play a ton of those operations...

Funnily enough this ice has some anti-synergy with Bryan Stinson, as removing a transaction from archives will make it weaker. But as you will have an absurd amount of money at that point, that is probably not something you should be bothered by. Also loses some bite when you shuffle back money cards with Preemptive Action and similar cards. All in all, a situational ice that starts out weak, but is potentially really solid.

Sunny's breaker gets through it for 4 credits at any time though, so watch out for mommy. Also Laamb.