subroutine You may place up to 3 advancement tokens on a card installed in a server. If you do, the Runner accesses that card unless he or she pays 3credit.

"If the sysop offers you a link, it's because they want you to go there. But if you wanted to go where the sysop suggested, you wouldn't be trying to break in at all." -How Not to Get Fragged
Jinteki • Adam Doyle • Reign and Reverie 38
All sets:
Links: Decklists | ANCUR 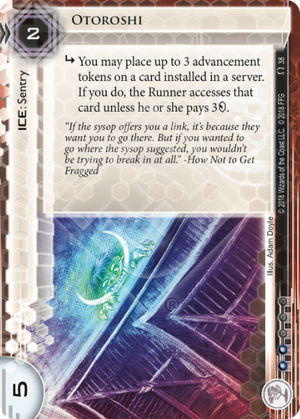 In terms of its numbers, Otoroshi has a gross tax of 6, (and a net tax of ~4), which are great in relation to its rez cost of 2. However, Its weakness lies in its subroutine, which the runner may allow to trigger.

Otoroshi can be placed on a remote server to threaten a flatline with Project Junebug or a rig wipe with Neurostasis if it is protecting an advanceable card, (making it ideal in a shell game glacier).

Otoroshi can also place advancement counters on cards that cannot normally be advanced, and can be combined with API-S Keeper Isobel to become an economic booster, making this ice very efficient and impactful.

Other synergies include Trick of Light for fast advance, Back Channels on an advanceable trap for an economic boost, and Constellation Protocol to support advanceable ice and Mass Commercialization.

If you find any other uses or synergies, mention them in the comments.

(NAPD Multiplayer era)
Apex Predator 26
It synergizes pretty well with False Flag if its protecting it. They will either boost it, allowing you to score it if they cant trash it, or make it more punishing to trash if they were going to do that anyway. — Handsome Jack 9 Sep 2018
re: Constellation Protocol "synergy", the advancement counters from Otoroshi can only be placed on cards in servers, and Constellation Protocol can only affect advancement counters on ice (not in servers). It's a nonbo, sadly. — archmage 12 Oct 2018