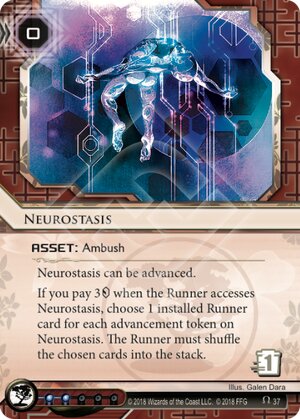 If you pay 3credit when the Runner accesses Neurostasis, choose 1 installed Runner card for each advancement token on Neurostasis. The Runner must shuffle the chosen cards into the stack.

Illustrated by Galen Dara
Decklists with this card

This card is much more powerful than it seems. You should consider putting this into your shell game Jinteki deck, instead the classic Project Junebug.

The most obvious comparison to make is to Project Junebug, which instead does 2 net damage for every advancement. In game, when playing shell game Jinteki, you mostly install and double advance to maximize the punishment if it is a trap and normally score if it is a 5-point agenda. Project Junebug with 2 advancements would do 4 net damage, trashing most of their hand and slowing down their tempo by making them click back their hand, which would take 1 turn of drawing or 4 clicks. It also has a side benefit of possibly disrupting their game plan.

Neurostasis with 2 advancements would trash 2 installed cards, and if they are icebreakers it would force them to search through their stack and reinstall them, which would secure your centrals and open a scoring window lasting multiple turns while taxing them. Reinstalling with a draw and install, (2 clicks), for both would cost 4 clicks, and that is not factoring their combined install costs, (usually about ~6 credits).

Therefore, Neurostasis is superior to Project Junebug in both taxing and utility.

This card is wonderful to get rid of Paperclips, especially if they are run as singles in criminal or shaper.