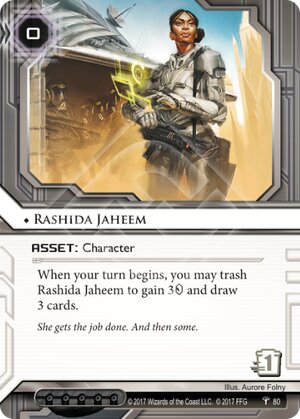 When your turn begins, you may trash Rashida Jaheem to gain 3credit and draw 3 cards.

She gets the job done. And then some.
Illustrated by Aurore Folny
Decklists with this card

Oh, I'll completely admit, I've done very little research with it myself. I've never played with it in my deck. I couldn't even tell you which data pack it came out in. And there, now with all of my credibility gone, let me explain.

WASN'T NGO FRONT ENOUGH!?!? Look, I get it, I get it. The corps needed something right? NGO Front, an absolutely obnoxious, influence-free, fits-in-nearly-any-deck, agenda-appearing, pseudo-trap-baiting, almost zero-risk to activate~ability whenever I want~ability (to the point where people are actually HAPPY to slot Interdiction which is just mad), was still a card that had its place. Right? I mean, I didn't like it, but I didn't have to. It brought something new to Netrunner that arguably, the corp was lacking. But then. Then. THEN struts in Rashida Jaheem, with her bulked up armor gear, fancy track pad and smug face that just wears the expression of "That's right. I just shat in your toilet and didn't flush. What are you gonna do about it little boy?"

Because now it doesn't matter if the card was advanced or not--there is a 0-influence asset out there that will screw you over. Now every corp has access to an influence-free pseudo-Black Level clearance that they can have all 3 clicks to react to. But that's not what really chaps my grits--it's the fact that just like NGO, Estelle Moon, Commercial Bankers Group and that toy peddling bastard Jackson (rest his soul), the corp can near-brainlessly put this single card down and put the runner in a no-win situation. It's not hard to put this thing behind ICE (I mean, it's going to be gone the next turn, so scoring servers are A-OK to drop this in, as long as you don't already have agendas in hand) and suddenly the runner is either forced to run it for fear of a 3/2 (and losing all the resources required to break in to get it) or they strategically let it be (perhaps they believe it to be a 4/2 or higher) in which they get punched in the face by the corp gaining 6 clicks worth of tempo. This all wouldn't be so bad (HB's Clearances do a similar thing, and while I hate them too, they are counterblanaced in that the big ones cost the corp their turn) except the corp spends 1 click to do this. One. Stinking. Click.

For one click, they offer the runner a decision. Blow resources to trash it for nothing, or allow the corp to gain a net 5 clicks of resources. (And yes, I know some geezer will be in here yelling at me for comparing a click to a credit but shutup for a moment, you know what I mean). I wouldn't care so much if this was a combo piece, or situational, or conditional--but it's just not. It's a single card. Heck, even if you install this in a blank-ass remote, you're still up tempo-wise by one credit when the runner spends one click and a cred to trash it.

"Oh, but the counterplay is to run HQ/R&D and trash it!" I hear some enthusiast shout. That's a straw-man argument for any card with a low trash cost. I mean, am I supposed to somehow precognitively know that the corp has this card in hand and know that I will hit it? Come on.

No, at the end of the day, Rashida Jaheem does indeed get the job done and then some. I just wish she did it in a bit more of a creative manner.

...and don't even get me started on CtM.

(Whispers in Nalubaale era)
Chezni 69
Cards like this are why I won't play competitively. And so many ways to tutor her if that's your thing. — LynxMegaCorp 18 May 2018
It’s hard to say at the moment the level of impact this card will have on the meta long term, imho. It certainly is a universally applicable card that most corps will consider, but whether it is broken, or even hugely above the power curve is a bit hard to tell. The game has sped up in general, and that means the best runner decks right now push harder earlier. It seems to harken back to the old days of “run early, run often”. When Temujin was a thing, runners could sit back a little and cash up on poorly defended servers and build a rig for a strong mid to late game push, now with Temujin gone, runners seem to force some ice rezzing, and poke earlier to cause tempo loss for the Corp. I prefer this line of play myself, and Rashida gives the Corp a way of bouncing back from that sort of play. That’s not to say that’s a good thing, because tactical runners should be making educated guesses and running servers, that’s good for the game, but does the Corp need a way to recover from that a little more, I’m not sure yet. I don’t know if this card is broken, it’s certainly a bit above curve, but whether that warps the game over time for good or bad we are yet to see. — Scoogsy 18 May 2018
Also, Diversion of Funda is about to become a thing. Corps may like a way of regaining tempo after being slapped with one of those early game. — Scoogsy 19 May 2018
5

Now that the dust has settled from this card’s previous (and only) review, I’d like to give Rashida a less emotionally-charged one. So let’s get this out of the way now then: This card is strong, way above the power curve and arguably a lot more flexible than the now-banned Violet Level Clearance. It’s also neutral and costs no influence so if you ever saw VLC out-of-faction before, prepare to see Rashida in those same decks. I’m going to discuss this in a non-CI viewpoint as I feel like Rashida and VLC are at a way different power level in that ID.

What makes Rashida more flexible? VLC’s main downside (besides its trash cost) was it that forced you to draw 4 on the last click of your turn. If you weren’t CI or didn’t have a Jinja City Grid or a Political Dealings or any other scheme up your sleeve, you were most likely over your hand size while ending your turn. Even if you weren’t, you had to wait out the runner’s turn to play with your shiny new cards. Rashida instead turns VLC from a Terminal to a Priority transaction – the Corp has their full 3 clicks to play some of the 4 cards they’ve just drawn. As a result, the Corp will rarely have to discard unless they triggered this on a turn where they started with a ton of cards.

Despite this, I’d still conclude that Rashida is not as ubiquitous as Hedge Fund or even NGO Front and that’s because it’s not a "lose-less" card. A sudden burst of 4 more credits in a click? Great. 8 credits payout from a 2 credit/3-click investment + the runner has to get through your scoring server. Not bad at all. Both of the aforementioned cards can help you come back from a deficit, even if you’re agenda-flooded. Rashida? Not so much. She’s not a great enabler for a Preemptive Action like VLC was and if she’s trashed, your agendas are stuck. I’ve played enough times with Rashida to try and get a solution for my agenda flood only to get 2 more agendas from her.

Know when to play Rashida and she'll get the job done – misplay and you might just find yourself in a worse situation than before.

(Reign and Reverie era)
BlackCherries 349
I don't know if I agree with this review. Ngo Front is def better from going back up from being very low on credits, but it requires a full turn's investement and if it gets hit by Interdiction of Drive by, you just wasted 3 clicks and 2 credits. Hedge Fund requires you to be at 5 credits and doesnt draw you cards. — Cpt_nice 25 Jul 2018
Rashida is essentially huge tempo for the corp. Even if the corp is at 0 credits, they immediately go back up to 3 and have 3 new cards to help further their plan. And that is worst case. 6 clicks worth of credits for 1 install is absolutely bonkers. Unless you are incredibly poor and have porous servers, there is no bad time to play Rashida. — Cpt_nice 25 Jul 2018