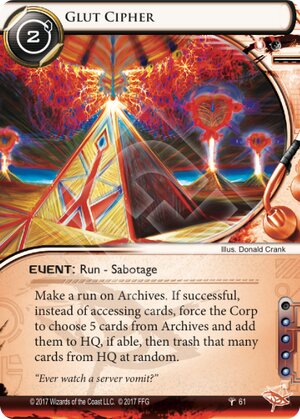 Run Archives. If successful, instead of breaching Archives, the Corp adds exactly 5 cards from Archives to HQ, if able. If they do, they trash 5 cards from HQ at random.

"Ever watch a server vomit?"
Illustrated by Donald Crank
Decklists with this card

If you’re like me then I'm sure you've wondered: what is the point of this card? Let’s start with some simple stories

If the Runner instead plays Glut Cipher, the chances that the Corp will discard the agenda among the 10 cards is 50%. An easy way to see how this is the case is to walk through how the trashed cards would be chosen: with my friends we have the Corp shuffle the cards and then hold 5 cards in one hand and 5 cards in the other. Runner chooses a hand and the Corp discards those cards. The chances that the hand they discard contains the 1 agenda is of course, 1/2.

Curious, but not our most interesting story. Let’s try another.

Interesting, no? But what does it all mean?

Glut Cipher is akin to Information Sifting. Unlike that card however, which improves with the more cards the Corp has in hand, the cipher improves when the Corp has less cards in hand. It also scrambles their plans, though of course it allows them to retrieve something useful as well.

Now, what are the chances that in the 2 agendas in HQ scenario you will trash both of the agendas? I have no idea. My math skills are not that advanced - I don’t even know if what I wrote above is correct.

In the 2-agenda scenario there is a 22% chance that you trash 0 agendas and a 78% chance that you trash at least 1. The cases where you trash both will be a subset of the cases where you trash at least 1. Let's name the agendas A and B, and assume that we know you will trash A at some point. It doesn't actually matter whether you trash A first or last, either way you will trash 4 cards that are not A, and we want the probability that one of them will be B. You have a 8/9 * 7/8 * 6/7 * 5/6 chance of missing B 4 times. This is ~56%, which means that conditional on trashing 1 agenda, there's a 44% chance you also trash the other agenda. Multipling 78% by 44% yields a ~34% chance you get both.

Is it sure, that the Corp is forced to trash the cards in HQ? I have a copy of that card in german, and from the text on that card it is quite clear, that the person who is playing the card (the Runner) is asked to trash that cards. Even on the english card you can read it like this: "then trash that many cards from HQ at random." Isn´t it the Runner, who is asked to trash those? Another argument is, that a player in netrunner never has to trash his or her own cards at random on its own. Its the other Part who has to select the cards at random. Maybe i missed something, but i think it is a wrong interpretation here. This card whould do much more sence, if it would synergice with cards like Consume

(System Core 2019 era)
boddah 1
It seems like a big run-on sentence. The corp has to choose...add...and if able, trash. All the corp's actions. — BlackCherries 22 Jan 2019
Btw - Officer Frank is another card that forces the corp to trash cards from HQ at random. — BlackCherries 22 Jan 2019
in that sentence the verb is "trash", but it should be "trashes", if the corp is the one who is asked to trash. It is a conjunction of to "to trash" which is aimed to the player, who playes the card. — boddah 22 Jan 2019
I was wrong, saying that there is no other card, where one player is forced to trash his own cards at random, because your exemple shows the that. But on #Officer Frank it is the right conjunction: "The Corp trashes(...)" — boddah 22 Jan 2019
I tend to agree with boddah. The card says "If successful, force the corp to..., then trash...". Its not "force the corp to choose and then force the corp to trash" It's bad templating and ambiguous in the terms of linguistic Skopus. — Hongkong Koma 25 Jan 2019