click,click: Turn one of your facedown installed cards faceup. If that card is an event, trash it.

"Its only function seems to be repurposing code."
"Can you kill it?" she asked.
"I can try," he said. Guiding his program dead center of the mass, he plunged, piercing the shell before an eruption sent his screen into static. He jacked out, his eyes wide. "I... I think it absorbed my breaker. And everything else."
Apex • Alexandr Elichev • Sovereign Sight 8
All sets:
Links: Decklists | ANCUR 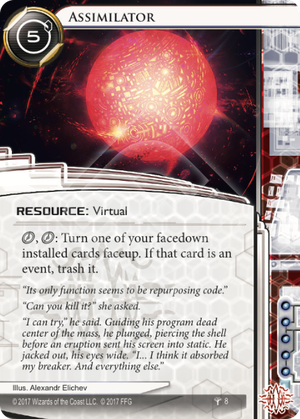 If I am reading it right, this card will let Apex use non-virtual resources.

And per the FAQ, facedown cards have no type or subtype:

Runner cards that are installed or turned facedown do not have a name, type or a subtype, and their abilities are not active.

So it seems Apex can install virtual resources facedown with his ability, then use Assimilator to flip them faceup, bypassing costs and install restrictions. I definitely want to use this to get an Aesop's Pawnshop into play!

(Sovereign Sight era)
andrewboydston 112
Yeah, but to get it face down on the table, you need to install it with either Apex or Hunting Grounds. I don't think it loses its subtype until after the install. So it is like the one Region per server rule. You could do it, and no one would neccessarily know, but it would be against the rules. I think anyway. — quailman2101 29 Dec 2017
Well according to the UFAC above, I guess Apex can use this for non-virtual resources. That's pretty cool I guess. Apex needs help because he sucks. More exciting to me though is the ability to use Cyber-Cypher on any server! — quailman2101 30 Dec 2017
Not sure why Cryber-Cypher is that exciting given that you don't pay the install cost. Gordian Blade would seem to be strictly better, — macydus2 31 Dec 2017
Forgot the 4 strength, still imagine other cards will be more impactful in the hardware/resource sphere. — macydus2 31 Dec 2017
2

Although it's appealing to see this primarily through the lens of Apex' big weakness (no non-virtual resources) the bigger effect on Apex may well be to give it access to a wide range of very efficient tools cheaply. Although many of the most expensive programs have rotated out a few remain:

Hardware has seen some of its most expensive pieces go away in the rotation as well, but the all time biggest credit eater is still there: Monolith. It doesn't synergize very well with Apex since the ability to prevent brain or net damage is worse than what Heartbeat already gives you but the 3 is nice and I guess it's at least a nice surprise during a game to turn up a hugely expensive console. Oh, wait. Console. Right... Yeah, it doesn't synergize with Apex at all unless you want to skip on Heartbeat and you don't want to skip on one of the absolute best Apex cards.

Ignoring the consoles the most expensive hardware is Adjusted Matrix. I guess it could be nice in the right deck, having the option to click through ice could help when Endless Hunger doesn't quite cut it.

On the resource side Rachel Beckman is nice. The shards (Eden, Hades and Utopia) were already available to Apex (virtual) and could already be installed without cost under certain circumstances, but having a way to buy them for a few clicks and otherwise leaving them as fuel is good for Apex. Plus the shards (and Beckman) are only 1 influence so they won't bust the budget.

Liberated Account becomes much more efficient if you only pay for it. Laguna Velasco District and Professional Contacts are also interesting, especially given Apex' need to draw cards.

A somewhat circular but slightly amusing option is to save 5 on installing Assimilator. Just in case you wanted to have a second one handy.

Aside from the expensive stuff Assimilator is perhaps even more effective just doing its thing in your deck since it lets you replace + X to install a card normally by Apex ability + . I don't expect this to be a complete game changer that will make Apex viable on a championship level, but my gut feeling is that it will make building a somewhat competitive Apex deck a lot easier.

Addendum: What I forgot to mention is that Assimilator has a small but nice effect on the game. It lets Apex have more hidden information in the form of face down cards. Normally only the corp lets their opponent play a guessing game.

Addendum 2: There's also a nice benefit with Apocalypse in that if you have an Assimilator on hand when you Apocalypse you can recover much faster from it than the corp by flipping your most valuable cards face up again.

(Sovereign Sight era)
Silv 296
Liberated Account gets its credits when installed, and Assimilator flips instead of installing, so a flipped Liberated would have 0 credits and would immediately get trashed. Monolith also wouldn’t get its “on install” effect (though you never suggested it would). — Netrunnerunner 31 Dec 2017
I was waiting for someone to point out an obvious error that I missed in hindsight. My reviews just don't feel the same without it. ;P Thanks. — Silv 1 Jan 2018
Adjusted Matrix doesn't work either since it needs to be installed from hand onto a breaker. — Reion 2 Jan 2018
2

Want to add the missing part : 3. Bypass "when install" restriction

Cause facedown cards do not have name, type or subtype, and their abilities are not active; you can install and "faceup" them without their "install" restriction.

(Sovereign Sight era)
NulluN 7
CyCy needs confirmation as well. It can only be used on the chosen server. Since it is never installed, the server is never chosen, so there is no chosen server it can be used upon. Without an official ruling, I'd say CyCy can not be used at all if you use Assimilator to bring it into play. — Krams 2 Jan 2018
You convince me ! If CyCy work, i am gonna use chameleon with no named subtype xD — NulluN 2 Jan 2018
Pretty sure that Assimilator doesn't work the way you want with chameleon. I could be wrong, but the difference seems to be where the linked ability references the thing named on install. CyCy sets up a restriction tied to the named object. Since there's no named object, the restriction is null and void, and CyCy can be used with impunity. Chameleon, on the other hand, sets up an ability that is dependent on the named subtype. With no named subtype, the ability becomes null and void, and chameleon becomes 1 credit: <nothing> — sortaevil 11 Jul 2018
Agreed. CyCy interaction makes sense and Chameleon unfortunately does not work with Assimilator. — BlackCherries 11 Jul 2018