"Ever heard of a catch-22?"
"Remind me to forget it."
NBN • Outland Entertainment LLC • Revised Core Set 100
All sets:
Links: Decklists | ANCUR 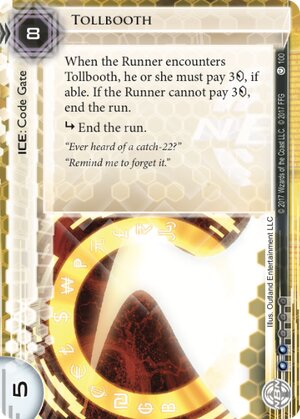 This is one of the most taxing ice in the game, combined with a hard end the run. That is rare enough that I would tell new players to start with this card when building corp decks of any faction.

Yes, it's Femme Fatale target #1, but put another way, it clears a Fem off the table while probably still ending the run at least once.

This costs Torch, the strongest code gate breaker in the game, 5 every time. It almost demands a Fem or Parasite + Datasuckers if the runner ever wants to see that server again. It is worth clicking for credits to pay for.

This card is very, very good.

(All That Remains era)
daytodave 1185
Femme Fatale will disable this card's run, but it will not disable the additional 3 credits you need to spend upon encountering this piece of Ice. It's still Fatale's biggest target in the early decks, but I've had a few new players get caught off-guard - thinking that all of Tollbooth's effects can be avoided even with the proper ice breakers. — GordonsBeard 2 Mar 2015
Ignore this, had some bad information when I posted it! — GordonsBeard 8 Mar 2015
13

This card, ladies and gentlemen. This card. My appreciation of the word 'toll' has gone up just by association it with this Code Gate. I suddenly feel like crossing bridges and reading Hemmingway. More of a barrier than most actual barriers, 5 strength worth of economic runner-wrangling, 2 influence, gold EVERYWHERE; I love it. I love it so much. Whenever a runner hits this card I hear a resounding 'DONG', and imagine a shower of credits leaping from their pockets like Sonic the Hedgehog stubbing his toe on a robot crab. Even when I'm on the recieving end and all my carefully laid (premature) plans gets hit right in the coins, I feel like nodding and going 'well played, card, well played.' And I like to think it hears me.

'Ok, I can tell it's good. But why is it THAT good?' A new player like myself probably will (definitely did) ask. Well, let's take a look at some of the many reasons:

STRONG: As mentioned by many in the Netrunner community back in the day, the Core Set had a conspicuous set of monsters known as the 'anarch breaker suite'*. Powerful, cheap and easy to splash (use in other factions), these were the standard against which all ICE were measured, because odds are they were going to be what the runner used. In the case of Code Gates it meant facing the glowy key of woe, that renders all >3 strength Gates meaningless by walking through them for 0. One of the simplest perks of Tollbooth is that it's out of its reach, even if they have Ice Carver out. If they want to get through, they'll need to combo it with Datasucker. And even if they do, they still aren't doing it for free, because...

LIKE DIS IF THEY PAY EVRYTIEM =') - Its best feature isn't a subroutine, it resolves before everything else, and kicks the runner out if they can't cough up 3 bucks. Only once they've met this requirement can they even start breaking it.

Everyone pays. (Wait, was Someone there? Hmm, must have been my imagination...) The point is this will present a very tall obstacle for the runner when they encounter it, and will add a recurring cost to the runners efforts from that point on.

CHEWY: Usually a scary presence for ICE of all types, even Parasite will have a tough time eating this, and even if it manages it before a purge, the runner will have probably put most of their effort into achieving it.

As for ways to play against Tollbooth: - As everyone says, keep a Femme Fatale handy, as she is a direct answer to this card, albeint at a pricey 9.

To sum up this card is one of the best pieces of ICE in the Core Set, and well worth including in almost every deck you make, even if you need to cut another piece of 'big' ICE from in-faction.

*For more information look up some of the great retrospectives by people like Willingdone on Youtube. They're easy to follow I learned a lot from them!

So, this is the most obnoxious piece of ICE in the game. What do you want your ICE to do? Like, generally, in the game of Netrunner, what's the plan?

So, just for example, this costs a Gordian Blade 3 to encounter, 3 to buff, and 1 to break.

Even a D4v1d is going to still cost you the 3 encounter fee.

I could go on, but there are only 15 Decoders in the game right now, and in my opinion, at the time of this review, big code gates are the biggest issue for runners, but Anarchs especially. With Yog.0 and Parasite taking hits in the Most Wanted List, getting code gates down to a manageable cost is very difficult.

So, how do you play around it? Well, easy answer is to make that large 8 rez cost a really difficult choice for the corp. It's not always easy with Breaker Bay Grid asset econ being the flavour of the month, a corp will gladly go down to zero knowing they can bounce back up to 2/3 credits before even their mandatory draw.

Femme Fatale is the best answer, turning this card into a simply 1 tax, but this has its own issues with the card being 9 to install. (Femme in the bin, Stimhack + Clone Chip.) Sure they might remove the targetted Tollbooth, but even if they replace it with another one, you've made them spend 8 credits.

The other answer is to run a few Spooned out of Anarch, and I think this is the way to go. Anarch's already have the worst problem with Code Gates. Lotus Field, is already enough of a headache for Yog.0 based rigs, enough to spend the influence on Atman for, and an Atman at 4 can break both Lotus and Tollbooth with Datasucker/Parasite support, but you've still got that egregious tax for encountering that is simply unsustainable, especially on a central. If you can't poke centrals consistently, the game moves to the remote, and thanks to BS like Ash 2X3ZB9CY and Caprice Nisei, contesting the remote is extremely difficult.

And hey, even an Ash behind a Tollbooth is egregious on a remote as well. Making two runs in a turn against that nonsense is painful.

Hunting Grounds is also a sort of answer, and does help against NBN especially with Data Raven, Pop-up Window and the like, but it's not foolproof by any stretch. You still have to actually break the Tollboth, but at 1 influence, it might be your preferred solution.

So, all in all then, great card, maybe even the best ICE in the game, post-MWL. 1 of goes in pretty much every corp deck I build, and as a runner it's one of the cards I really hate to see rezzed.

(Data and Destiny era)
Fentonizer 311
Nasir with Crescentus recursion makes Tollbooth sad. Probably sad enough that the corp won't even bother installing/rezzing it. If only Nasir was viable... — enk 22 Jan 2016
2

Prohibitive cost for both sides.

One of Femme Fatale's most popular targets.

If it had more than one subroutine, it would obviously be even stronger, so as a Corp, consider playing it with ICE that adds them (Sensei, Chum, etc.)

(All That Remains era)
vesper 161
2 points. Firstly, 8c is good value for a taxing ETR that costs too many credits to break each time (for a runner), thus an extra sub would make too much difference. However, comparing it to a pair of data pike is no contest. Tollbooth costs Gordian blade 7c, 2 Datapikes cost it 4. On encounter effects are unbelievable. — Nerdfighter 25 Sep 2015