The Great Work was completed on a rainy Thursday afternoon. There were no seismic shifts, no solar flares, no sign from the earth or heavens that the world had changed. But upstalk in Heinlein, on a single Cybsoft manufactured datacore, the flickering data quantums of an account began to fill with creds. Real, honest-to-goodness UN certified creds.
Shaper • Outland Entertainment LLC • Revised Core Set 50
All sets:
Links: Decklists | ANCUR 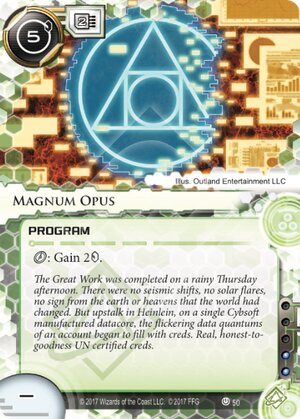