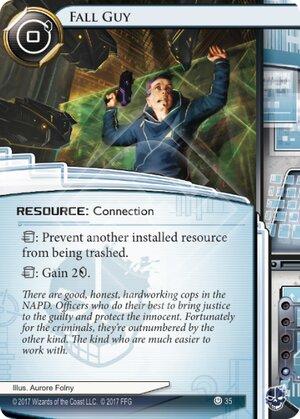 trash: Prevent another installed resource from being trashed.

There are good, honest, hardworking cops in the NAPD. Officers who do their best to bring justice to the guilty and protect the innocent. Fortunately for the criminals, they're outnumbered by the other kind. The kind who are much easier to work with.
Illustrated by Aurore Folny
Decklists with this card

A modal card in the vein of Infiltration which rewards you for playing it even if you don't find a use for its primary ability (preventing a resource ). Fall Guy hasn't seen a ton of play but can be important in decks that rely heavily on a single resource to execute their game plan. Notable possibilities include:

One excellent example of Fall Guy usage is in StarkandTully's combo MaxX list which hosts many viruses on Personal Workshop while building up; Fall Guy protects against the "score Breaking News->trash PW" play.

While Fall Guy is clearly intended to protect resources, the second 2 ability should not be discounted as its real-time nature allows you to obtain credits just when you need them (to steal an NAPD Contract, to trash an asset, beat an Ash trace, etc…). In Geist in particular, Fall Guy becomes playable purely for its second ability as it turns into a better version of Green Level Clearance on the runner side.

(The Underway era)
phette23 2236
Do note that you don't have a paid ability window mid-access or after a trace has been initiated. That said, it can get you to 4 credits before accessing a remote where you suspect a trashable asset or an NAPD might be. — Tozar 20 Jul 2015
Right, a great point. I guess I'd hoped that was implied. I can definitely see situations where one's uncertain whether to pop FG for extra creds when you don't know if the agenda you're about to access is NAPD or not. — phette23 20 Jul 2015
Ok, I'm confused on what it means by "another" resource — Kutpurse 8 Feb 2018
@Kutpurse Instead of the Corp trashing one of your resources (let's say because you're tagged), you can trash Fall Guy to prevent this so that the Corp will need to spend another click and 2 creds to trash the original target resource. Additionally, Fall Guy helps with self-trashing resources such as The Source. — BlackCherries 13 Sep 2018