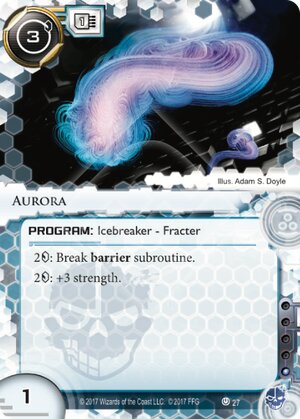 I vehemently disagree with (appropriately named) @XxAuroraUser69xX. I suspect that his review might be a joke...at least, I hope so. Because Aurora is not "one of the better icebreakers", it is actually one of the worst. For the sake of the newer players, allow me to say why.

For the sake of argument, lets compare Aurora to the best dedicated barrier-breakers from the other factions: Snowball out of Shaper, and Corroder out of Anarch. Battering Ram is also about on par with these, provided you have the memory for it.

Clearly, Corroder is better than Snowball, unless the corp misplays and stacks multiple barriers on the same server, because the have the same cost to boost and break but Corroder is cheaper to install and has an extra strength.

But it's equally clear that Aurora is worse than Snowball. When you boost strength, Aurora is significantly less flexible. Sure, if you're breaking a Bastion it's 1 cheaper to get it up to strength, and 2 cheaper against a Hadrian's Wall...but you have to pay 1 more against a Himitsu-Bako. The real killer, though, is that you have to pay 2 instead of 1 for every subroutine. So even if you are breaking a Bastion or a Hadrian's Wall and you can take full advantage of Aurora's more efficient boost cost, the more expensive subroutines are going to wipe those savings out.

No matter what ICE the corp is playing, it's always going to cost you more to break it with Aurora than with Snowball or Corroder. As such, any Shaper or Anarch who plays Aurora needs to have his or her head examined. Maybe that's okay, though, for Criminals who want to save influence, or just need a fracter as a support for an AI breaker or to turn off Wraparound.

Enter Breach. Cheaper to install, higher base strength, in-faction. It ranks favorably with Corroder on weaker barriers, and absolutely mops the floor with big barriers like Curtain Wall and Wotan due to it's juicy 2-for-4 boost and 2-for-3 break. The only catch is that you can't use it against remote servers. But for the faction with Inside Job, Femme Fatale and similar shenanigans, you can easily make it a whole game without ever needing to break a barrier on a remote.

I won't say that you should never ever play Aurora...but if you ever find yourself needing to use it, you've probably messed up somewhere and should stop and think carefully.

(Order and Chaos era)
tiedyedvortex 4696
at a 0 install this still would be unplayable, but at least a more reasonable card. granted it came in the core set and they wanted to highlight the faction's Icebreaker specialization, but still. jokes — moistloaf 19 Feb 2015
Yeah he — rezwits 19 Feb 2015
trippin' — rezwits 19 Feb 2015
Actually the best Shaper fracter is Lady. — Kroen 19 Feb 2015
True, Lady is better, but since it's limited-use the comparison would have to be a little more abstract. — tiedyedvortex 19 Feb 2015
None of you are free of sin — XxAuroraUser69xX 27 Feb 2015
Let's at least not forget that Criminals get e3 Feedback Implants... — LynxMegaCorp 27 Mar 2015
Agree with @Lynx, Aurora needs e3 to be playable, and with it breaks most barriers for 1-2$ more than Corroder. That's not horrible for a no-inf option in criminal. — PureFlight 11 Mar 2016
With e3 being in the first set to cycle out perhaps a new support card is needed to help icebreakers like aurora? Maybe something like personal touch/netready eyes but it reduces each activation cost of a non-AI icebreaker program by 1 to a minimum of 1? I think FFG should really try to raise the appeal of the icebreakers that almost never see play. — DGB123 1 Oct 2016
22

One of the better icebreakers in the game, if you can get over the frankly negligible cost to break lower strength barriers. Sure, it takes an enormous six credits(6 credits) to break an Eli 1.0, but that's what Overmind was made for. When you consider that you can get through a Curtain Wall for only ten credits(10 credits) it becomes apparent that you're saving money in the long run, and for only one influence it's right up there with Yog.0 and Mimic as one of the easiest to import breakers in the game. 4.5/5

Speaking as a relatively new player with few cards outside the Core Set, Aurora is so obviously bad that I'm pretty sure it was released as a teaching tool. With deckbuilding being a core part of Netrunner, Aurora is a simple way to nudge new Core Set players into it and experiment with those 15 influence points. No matter how much money you're making with Gabe you'll soon think, 'Man, breakers are expensive.' Then you move over to Noise and think, 'Whaaaaat?'

So you swap in a few red cards, see there's no code gate breaker readily available, bring in a Yog.0, then maybe a Datasucker to overcome its weakness, thinking about some useful green cards you can get for your remaining points and before you know it, you're deck building. I'm not being sarcastic when I think that's a very helpful thing to be in the game.

So, thank you Aurora for being so obviously bad that it made that intimidating first swap so simple. Thank you, and whenever the inevitable Arctic expansion is released and you get a 'Borealis' host card that lowers all usage costs by 1 , I'll be glad to welcome you back.

(Democracy and Dogma era)
Tirranek 587
That host card better not lower costs below 1 or it's going to be utterly broken. :v — LordRandomness 20 Apr 2016
When you're criminal, you have lots of money and tend to run without any breakers for most of the match. It's last resort, yes, but it's a solid last resort in this particular faction. — H0tl1ne 20 Apr 2016
Definitely true about having loads of money and being a mostly event-based faction, but with breakers being the runner's main reoccuring expense, keeping such an inefficient one in the deck will weaken most of your other cards. I love the idea of giving weird or underplayed breakers a spin to see if they can work, but Aurora doesn't seem to have any redeeming quirks. — Tirranek 26 Apr 2016